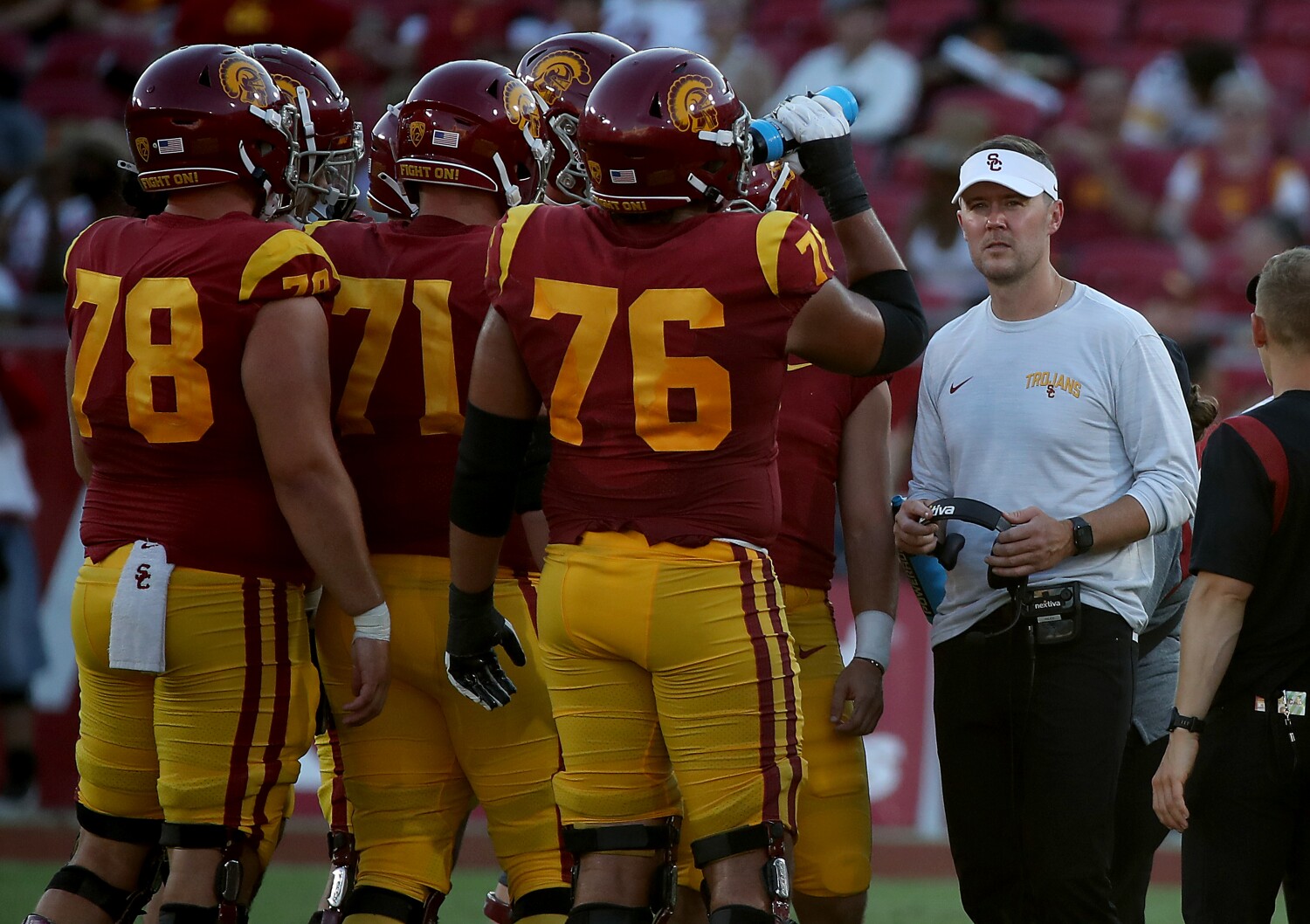 It was an unusual plan at a position not accustomed to regular rotation. But after one Saturday of its left-tackle-by-committee approach, USC appears to be in no hurry to decide between Courtland Ford or Bobby Haskins as the Trojans’ sole left tackle.

Ford officially got the start in USC’s 66-14 win over Rice, but Haskins spelled him on the next drive. The two tackles continued to rotate throughout, finishing with 24 snaps apiece.

“They both handled it well,” USC coach Lincoln Riley said. “I thought it was a winning effort from both of those guys, what we hoped it would be. Obviously as the time goes on, you’re probably going to get more snaps, more opportunity to look at them. But neither one of them hurt themselves by any stretch. I think they both showed why they’re going to both be in the mix, and then we’ll just see how this thing evolves from here.”

Whether those snaps will stay perfectly balanced remains to be seen. Asked whether he might employ the same strategy this Saturday in USC’s Pac-12 opener at Stanford, Riley said, “there’s always a chance.”

One thing seems clear: USC’s open battle at left tackle will continue for at least one more week.

“You gotta just let it play out,” Riley said. “We know we’re going to need more than five offensive linemen this year, whether it’s playing multiple guys there or somebody goes down and you need to slide people around. There’s gonna be value. Positives and negatives to both. If it works out where somebody separates himself, that’s great. My hope is that somebody is playing unbelievable and the other is playing really good and that’s the separation. And right now, that’s what it’ll take.”

A 52-point win offered Riley the chance to dig much deeper into his offensive line depth at other positions too. Reserve linemen Mason Murphy, Gino Quinones, Cooper Lovelace, Andrew Milek and Joe Bryson all played at least 12 snaps.

After a dynamic debut, freshman running back Raleek Brown left the Coliseum on Saturday on a cart with a large bag of ice affixed to his right ankle.

In spite of that unsettling postgame scene, Brown took part in practice Tuesday. His ankle was heavily taped, but Riley said Brown was able to do “quite a bit” with USC’s offense, nonetheless.

“If he keeps progressing, I’d expect him to play,” Riley said. “But we’ll see.”

“He might be ready this week,” Riley said. “We’ll see if he can do anything in the next few days, but not quite ready yet.”

Defensive lineman De’jon Benton had a cast over his left forearm and hand and did not practice Tuesday. But when asked whether Benton might be out for an extended period, Riley said he had already “bounced back quick.”

“Another guy that we’re hopeful can do something for us this week,” Riley said.

For the first time in nearly half a decade, USC has moved into the top 10 of the Associated Press top 25 poll.

The Trojans slotted in at No. 10 after their dominant debut win over Rice, making them the highest-ranked team in the Pac-12.

Utah fell six spots to No. 13 after losing to Florida, while Oregon tumbled all the way out of the top 25 after its blowout loss to Georgia.