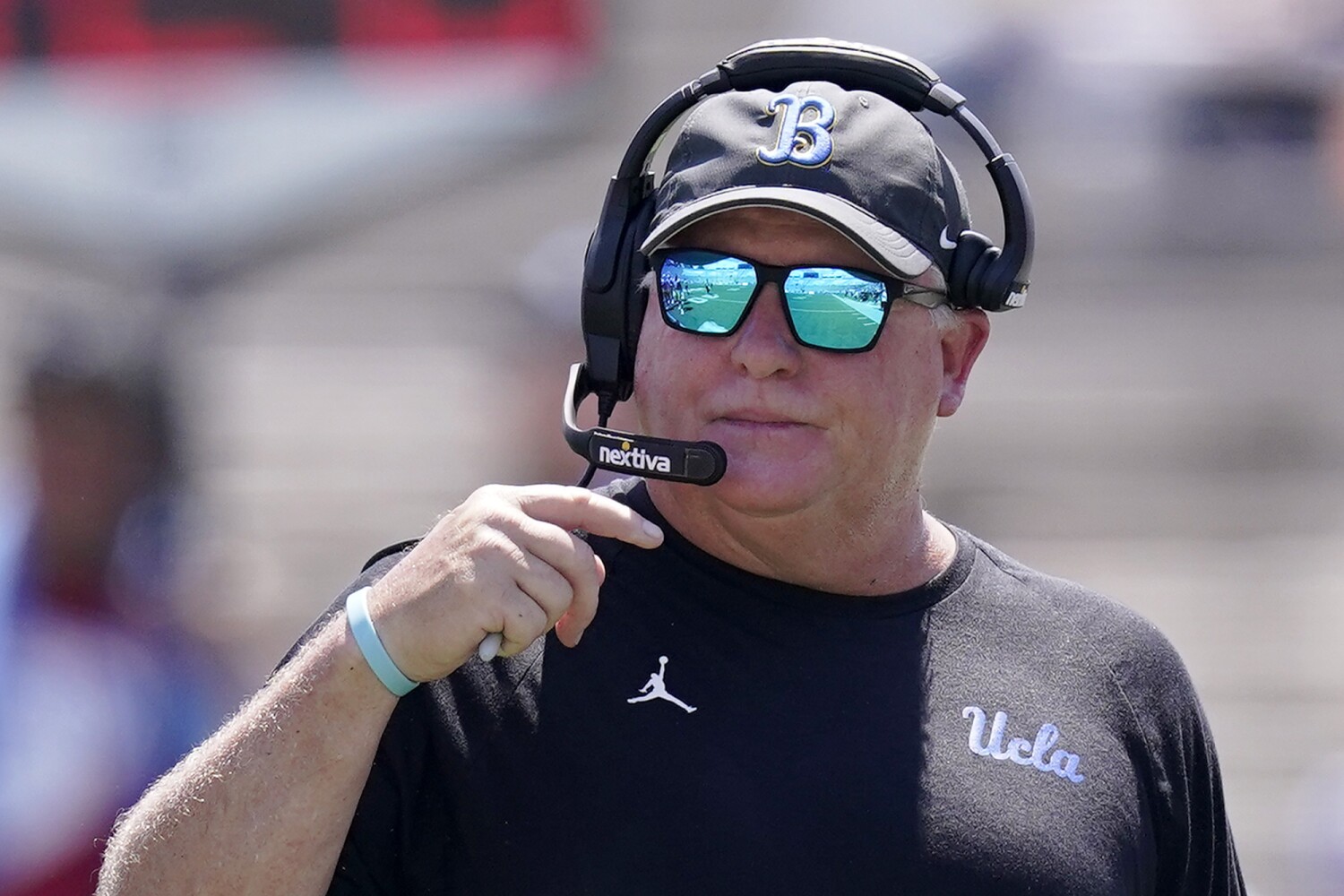 What a nightmare, and that’s not a reference to the triple-digit game-time temperature.

UCLA’s opening drive, which ended with a blocked punt that Bowling Green returned for a touchdown?

The timeout Chip Kelly was forced to call because his punt returner was wearing the same number as one of his blockers?

The delay of game call on the opposing one-yard-line?

Games like this are designed to inspire dreams, the destruction of a nonconference patsy generating optimism for what’s ahead. In the case of UCLA, its season-opening 45-17 victory over Bowling Green on Saturday tempered expectations.

The start of Year 5 for Kelly at UCLA shared many similarities to his previous seasons in Westwood, the Bruins continuing to make mistakes that would have cost them against an opponent that wasn’t entirely overmatched.

Their ability to turn a 17-7 second-quarter deficit into a blowout win was more of a credit to their superior talent than their readiness.

Whatever self-inflicted damage they sustained, the Bruins ultimately had weapons the visiting Falcons didn’t, from quarterback Dorian Thompson-Robinson, who scored their first touchdown on a 68-yard run, to running back Zach Charbonnet, who rushed for 111 yards in 21 carries.

Thompson-Robinson and Charbonnet were the offensive leaders the Bruins envisioned. An improved defense limited Bowling Green to 162 yards of total offense and allowed UCLA to score 38 unanswered points.

Kelly was inclined to emphasize these positive aspects of the comeback, applauding his team’s spirit. And while the coach blamed the absence of preseason games for the early mistakes, their stubbornly loyal fans who braved the heat had to wonder if they would be subjected to more of the same. The errors were uncomfortably familiar.

“You’ll never play a perfect game,” Kelly said. “There are always things that you’ve got to work on after every game you play. … Winston Churchill said that the problems in victory are a lot more agreeable than the problems in defeat but they are no less difficult. So, we have things we have got to get better at, and I think that’s what college football is.

“As I told our guys, I hope our goal is that this will be the worst game we play. That’s how learning happens. You’ve got to correct those mistakes. That is what the process is for us, and I think that our guys understand that.”

Kelly has offered variations of that statement in the past, and the problems have persisted.

The fan base’s declining faith in Kelly was evident in the announced attendance of 27,143, the smallest crowd to watch a UCLA home game in its 41 years at the Rose Bowl.

The figure included no-shows, as well as yours truly.

Whoever missed the game was spared not only oppressive heat that reached 100 degrees but also some maddening football.

The Bruins punted from their own 23 on their opening drive. Nicholas Barr-Mira’s kick was blocked by PaSean Wimberly and the loose ball was scooped up by Charles Rosser, who ran it into the end zone.

Thompson-Robinson tied the score with a 68-yard run and forced the Falcons to go three and out on their next drive. However, before the Falcons punted, UCLA called timeout.

Punt returner Jake Bobo was wearing No. 9. So was Choe Bryant-Strother, who was part of the return team. Bobo slipped into a No. 87 jersey.

“That’s been something we worked on all week,” Kelly said. “I don’t know exactly what happened on that one, but he has to put a jersey on cause Choe Bryant-Strother’s is No. 9, he’s on defense and he’s on our punt rush team, so …”

Asked by Ben Bolch of The Los Angeles Times whose responsibility that was, Kelly replied, “That’s ours.”

UCLA’s ensuing possession ended with Thompson-Robinson throwing a pass directly into the hands of Bowling Green linebacker DJ Taylor. The Bruins were fortunate not to find themselves down by a touchdown soon after, as Falcons quarterback Matt McDonald overthrew a wide-open receiver inside the UCLA 10.

Bowling Green punted, only for Bobo to drop the ball after signaling for a fair catch. A 24-yard field goal by Mason Lawler moved Bowling Green back in front 10-7.

Down 17-7 in the second quarter, UCLA started its comeback with another mistake: The Bruins were called for delay of game on the Bowling Green one. The small but vocal crowd booed lustily.

Pushed back to the six, the Bruins settled for a field goal.

On the bright side, whereas Kelly tried to downplay his team’s sloppiness, Thompson-Robinson owned his mistake. Rather than boast about his two touchdown passes, he mentioned his intercepted pass when asked to reflect on his performance.

“I can’t stop thinking about the pick,” Thompson-Robinson said. “I’m going to be super, super critical about that, making sure to clean up those mistakes, especially a lot of the stuff that happened in the first quarter.”

He almost certainly knew what everyone else in the stadium did.

Against Bowling Green, the mistakes didn’t matter. But against Utah, they will. Against USC, they will.