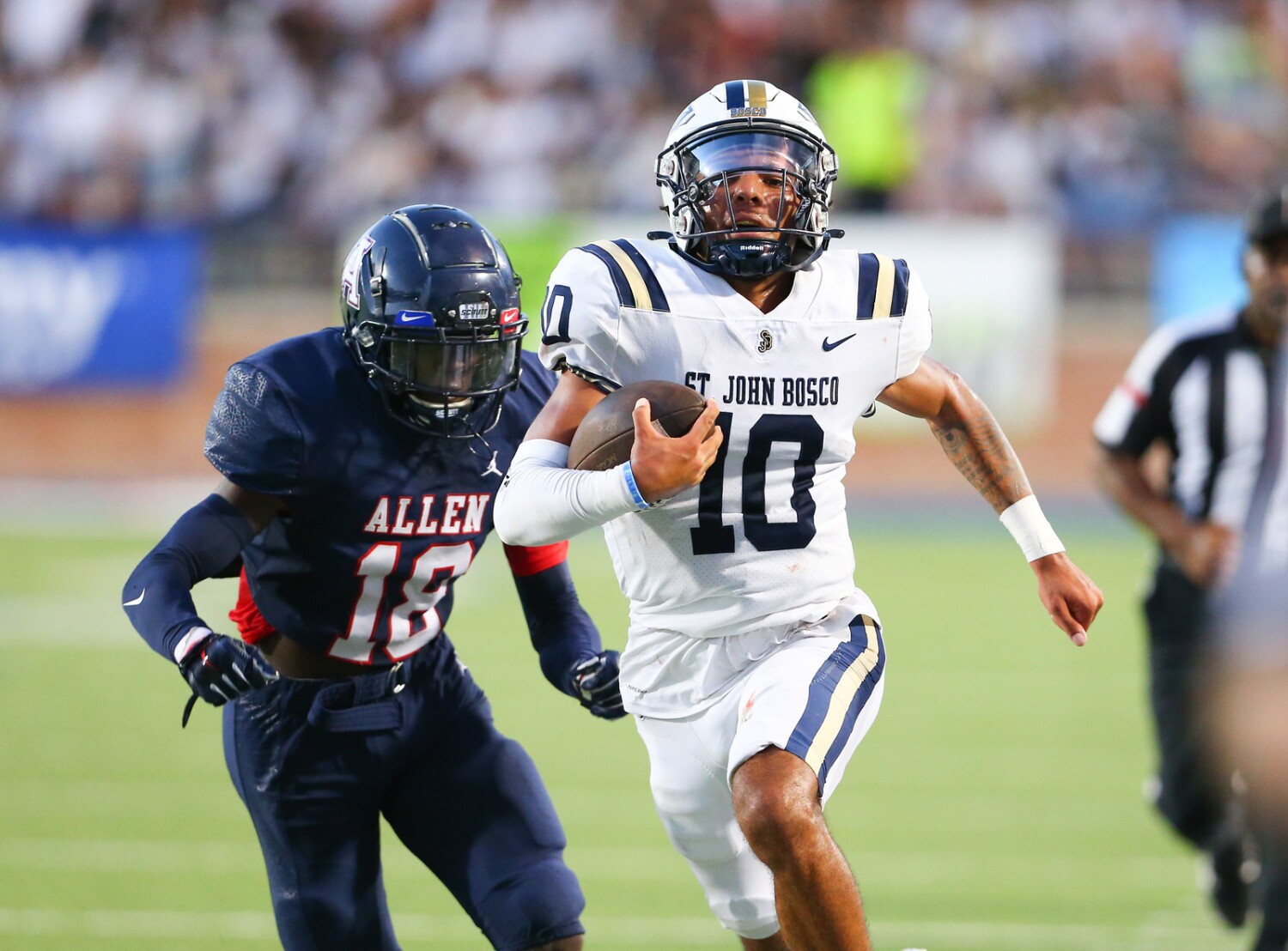 As if right on cue in the state where “Friday Night Lights” was turned into a book, a movie and a TV series, the sky opened with pouring rain as the kids from California who rarely see rain, Bellflower St. John Bosco High, could only smile while glancing up at a scoreboard that showed the Braves pouring it on the Allen Eagles.

In a $60-million stadium that seats 18,000 and was filled, St. John Bosco became the second consecutive top team from California to come to Texas and inflict a thorough beating on one of Texas’ top 6A teams with a 52-14 victory Friday.

“It was amazing,” St. John Bosco safety Ty Lee said when the downpour happened in the second quarter. “It’s probably my best experience playing football. It was just fun.”

The lead was 38-7 at halftime and the warm rain came down with such fury that it forced Allen’s band of more than 800 members to cancel its halftime show. The loyal Allen students dressed in white T-shirts refused to budge from the student section, standing in their soaking shirts. Now that’s school spirit.

St. John Bosco came away with a convincing season-opening victory playing in the first of what could be four games in out-of-this-world stadiums that few high school athletes have ever experienced.

The Braves have a road game at Autzen Stadium in Oregon, are expected to play Santa Ana Mater Dei on Oct. 7 at SoFi Stadium, and if they reach the Southern Section Division 1 final, they would play at the Rose Bowl on Nov. 25. Somebody better be taking photos on their 2022 journey.

The Braves certainly looked the part of the No. 2-ranked team in Southern California.

Matayo Uiagalelei, a 6-foot-5, 267-pound senior, caused his usual havoc at defensive end and caught a seven-yard touchdown pass. DeAndre Moore had a 55-yard touchdown reception for St. John Bosco’s first touchdown, using his speed to turn a short pass from quarterback Pierce Clarkson into a big play. Clarkson passed for three touchdowns and ran for another.

In a development that could help the Braves, their special teams play was also good. New punter Marcus Lee twice put punts inside the 10-yard line that led to a safety and a touchdown.

“We were so suffocating on defense,” St. John Bosco coach Jason Negro said.

It was eight hours before the season-opening kickoff for Texas high school football, and Brandon Weber of Allen Eagle Nation was showing off “dripping brisket” wrapped in foil after cooking all night with hickory and pecan wood. He was in the events center parking lot preparing to feed Allen High tailgaters when they start showing up at 5:30 p.m. for a 7 o’clock kickoff.

“This is Texas,” he said sweating through his shirt in the Texas heat. “We don’t mess around with our tailgates.”

It’s not only barbecue that gets visitors excited. One look at the nearest gas station and a Los Angeles native might immediately slam the brakes because the price for a gallon of regular unleaded showed $2.99.

St. John Bosco took a 5 a.m. flight from LAX on Wednesday to Dallas and practiced at SMU. On Thursday, the team boarded three trolley buses for a 70-minute tour of Dealey Plaza and the motorcade route where President Kennedy was assassinated on Nov. 22, 1963. Later, they went to a barbecue restaurant to feast on brisket and chicken.

“The brisket was good,” equipment manager Burrel Lee said. “I can’t say anything more because I have friends with a barbecue shop back home.”

Last year, Mater Dei made the same trip to Dallas and came away with a 45-3 win over Duncanville on the way to a 12-0 record. Allen, about 25 miles from Dallas, is where Arizona Cardinals quarterback Kyler Murray went to school. More than 500 students are playing football with four freshman teams and three JV teams.

It was the first high school football game in California history in which a group of players was paid as part of a name, image and likeness deal with a Texas sports performance company. Negro said that 57 players agreed to participate and checks of $200 were given out Thursday night. They could make $400 for the agreement. It might be a bargain considering where the Braves hope to be headed this season.