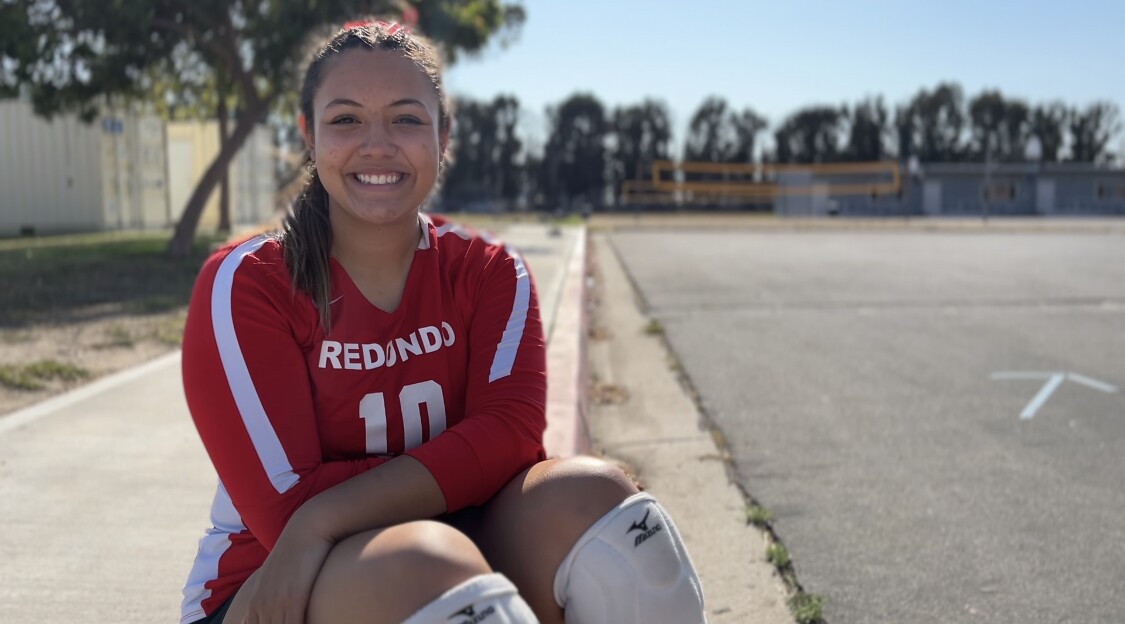 One summer day a few years back, Krystle Corral-Blagojevich returned home from work, as usual. She cracked open the mailbox, as usual. Found a thick envelope from the White House. What?

She was confused because the letter was addressed to her 9-year-old daughter.

A few days earlier, Mele Corral-Blagojevich had read a story about a coyote being euthanized. Reprehensible to the fourth-grader with veterinary dreams. With her aunt’s help, she typed a creatively punctuated plea for improved animal rights to the White House that began, “dear Mr. president (sic) Obama.”

“I have explained to my mom that even though I am only still 9, that I can do anything I put my mind to,” the young Corral-Blagojevich wrote.

She’s always been eager to use her platform, no matter how small. Now in the fourth year of a standout volleyball career at Redondo Union High, the impassioned Oklahoma University commit is putting her mind to her own personal brand in the NIL era.

Corral-Blagojevich knows she’s different. Knows her background — with a family mixed of Tongan, Mexican and Serbian descent — is one-in-a-million unique. Knows she isn’t the long, lean, white picture of a girls’ volleyball star. She hopes to make herself visible to girls that used to be her — girls who might not see themselves represented often on the court.

Growing up, Corral-Blagojevich remembered, her parents would tell her she had something unique. “Mele Magic,” they called it.

It’s now the vision for her personal brand name, which she’s trying to build through a partnership with athlete consulting firm KCW Consulting Group.

Redondo Union coach Tommy Chaffins was spellbound by that magic from the first time he saw a 12-year-old Corral-Blagojevich play, captivated by her powerful swing and competitiveness. As a freshman, she led the Sea Hawks in kills on a team that had 12 players receive college scholarships, Chaffins said.

“I would argue she’s like a grand chess master,” Chaffins said. “She sees plays two, three plays before it happens.”

Larger than her personal goal of winning the Gatorade player of the year, Corral-Blagojevich is the beating heart of Redondo Union’s circulatory system. Teammates have said ever since her freshman year that her on-court presence was “calming,” Chaffins said.

She’s a catalyst off the court, helping to raise more than $1,800 through her club team for relief efforts for Tonga after an underwater volcano erupted in January.

“She’s, without a doubt, one of the top three leaders I’ve ever coached,” Chaffins said.

It’s a role she loves to embrace, both for her team and a younger generation.

She’s felt different while maturing thick-boned in a sport of the skinny, from a melting pot of an immigrant family in a sport of which college players are almost two-thirds white. When she was 9, a coach told her she needed to lose weight to be taken seriously with their club team. When she ordered uniforms growing up and requested large-size Spandex, coaches would ask, “Are you sure?”

“It was something that could’ve broken her,” said Corral-Blagojevich’s mother, “but it didn’t.”

She still gets criticism today, but over time she’s realized it’s OK to be different — and taken flight in volleyball for it.

“Everybody has their strengths,” she said. “And I think when I’m comfortable with who I am, I lean into those.”

The unexpected envelope in her mailbox long ago, her mother remembered, contained a letter from former President Obama — well, “President Obama,” her mother air-quoted — that encouraged the young girl to lead in her community. Plus, there was a picture of the Obamas’ Labradoodles.

“That definitely helped open me up,” Corral-Blagojevich said, “and feel confident that my voice was going to be heard.”

Now, heading to Oklahoma, she’s ready to share Mele Magic with the world.