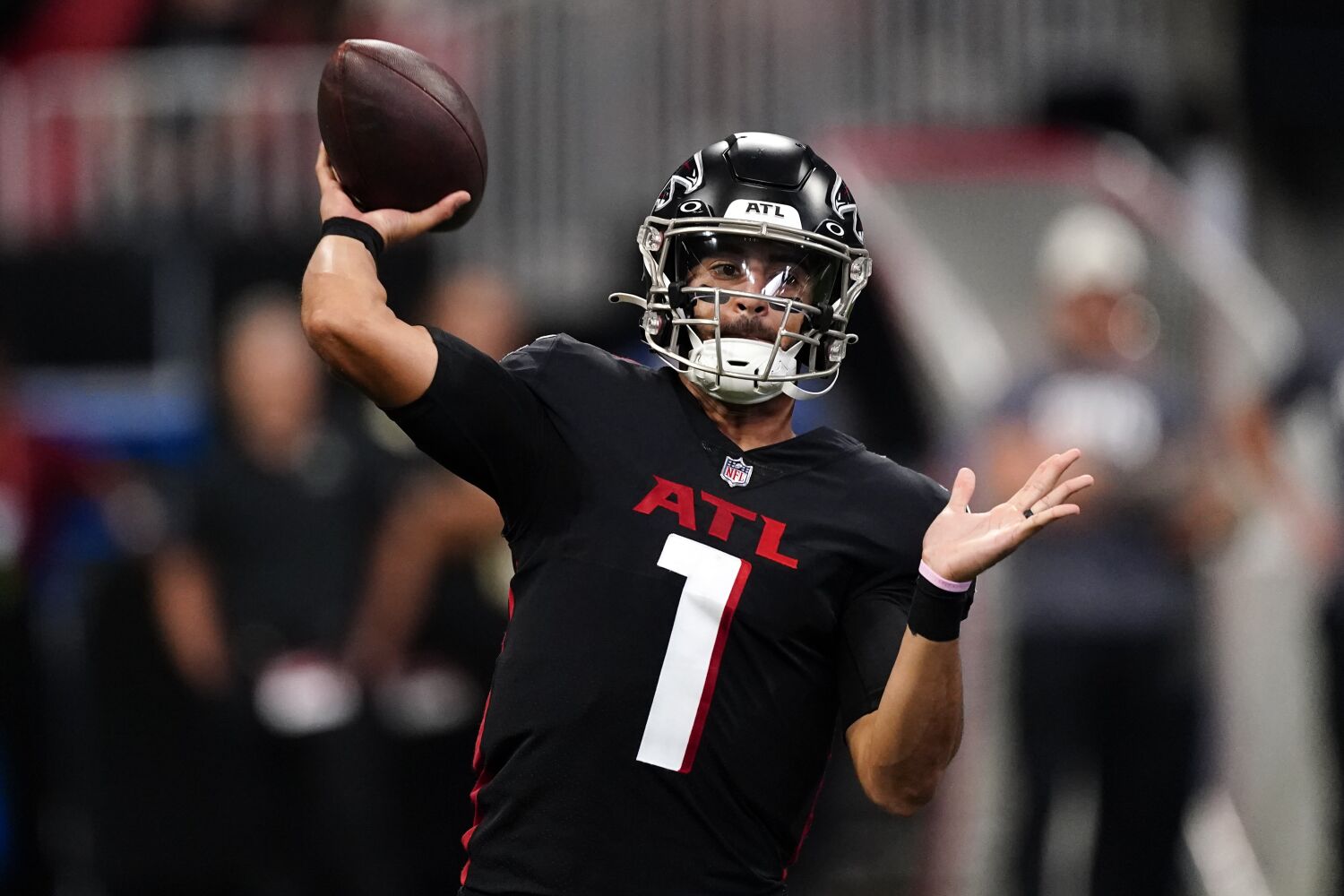 Breaking down how the Rams (0-1) and the Atlanta Falcons (0-1) match up heading into their game at 1:05 p.m. PDT on Sunday at SoFi Stadium. The game will be shown on Fox.

When Rams have the ball: The Rams’ offense needs a reboot after stumbling throughout a season-opening 31-10 loss to the Buffalo Bills. Quarterback Matthew Stafford was sacked seven times and had three passes intercepted. Now he’ll be operating behind a reconfigured offensive line that features Coleman Shelton at center and Tremayne Anchrum making his first start at right guard. Left tackle Joe Noteboom was limited in practice because of a knee sprain. If he does not play or is slowed, Alaric Jackson will step in. One of coach Sean McVay’s main goals is to get wide receiver Allen Robinson involved early in the game. Against the Bills, Robinson was targeted only twice, and he had one catch. His two targets were the fewest of his nine-year career in a game in which he didn’t incur a season-ending injury. The Rams also must establish a rushing attack, especially against a Falcons defense that gave up 151 yards rushing in a 27-26 loss to the New Orleans Saints. Darrell Henderson gained 47 yards against the Bills. McVay told reporters this week that running back Cam Akers must play with more urgency. The third-year pro played just 12 snaps against the Bills and gained zero yards in three carries. Defensive end Grady Jarrett leads a Falcons front that had four sacks against the Saints. Safety Richie Grant had 10 tackles for a defense that also includes cornerback AJ Terrell.

When Falcons have the ball: Marcus Mariota, the No. 2 pick in the 2015 NFL draft, is the quarterback for a team trying to improve on last season’s 7-10 record under second-year coach Arthur Smith. Mariota completed 20 of 33 passes for 215 yards and rushed for 72 yards and a touchdown against the Saints. Versatile running back Cordarrelle Patterson rushed for a career-high 120 yards and a touchdown in 22 carries, and also caught three passes. Former USC receiver Drake London, the No. 8 pick in the 2022 draft, had a 31-yard catch against the Saints. Mariota’s targets include receiver Olamide Zaccheaus and tight end Kyle Pitts, the fourth player chosen in the 2021 draft. The Rams could be without outside linebacker Leonard Floyd, who is nursing a knee injury. If Floyd sits, Justin Hollins and Terrell Lewis would start on the edges. Rams defensive lineman Aaron Donald had a sack against the Bills and needs one more to reach 100 in his career. Linebacker Bobby Wagner had seven tackles in his Rams debut. The Rams forced four turnovers against the Bills, including interceptions by Lewis and cornerback Troy Hill. Star cornerback Jalen Ramsey looks to bounce back after struggling at times against Bills receiver Stefon Diggs.

When they kick: Matt Gay picked up where he left off last season, making a 57-yard field goal against the Bills. Riley Dixon averaged 40 net yards for four punts. Snapper Matthew Orzech is nursing a calf strain but said he will play. Falcons kicker Younghoe Koo made four of five field-goal attempts in the opener, including from 50 and 54 yards.

Gary Klein’s prediction: The Rams played poorly in their season-opening loss and now Stafford will operate behind a reshuffled offensive line. But they will still defeat the Falcons.