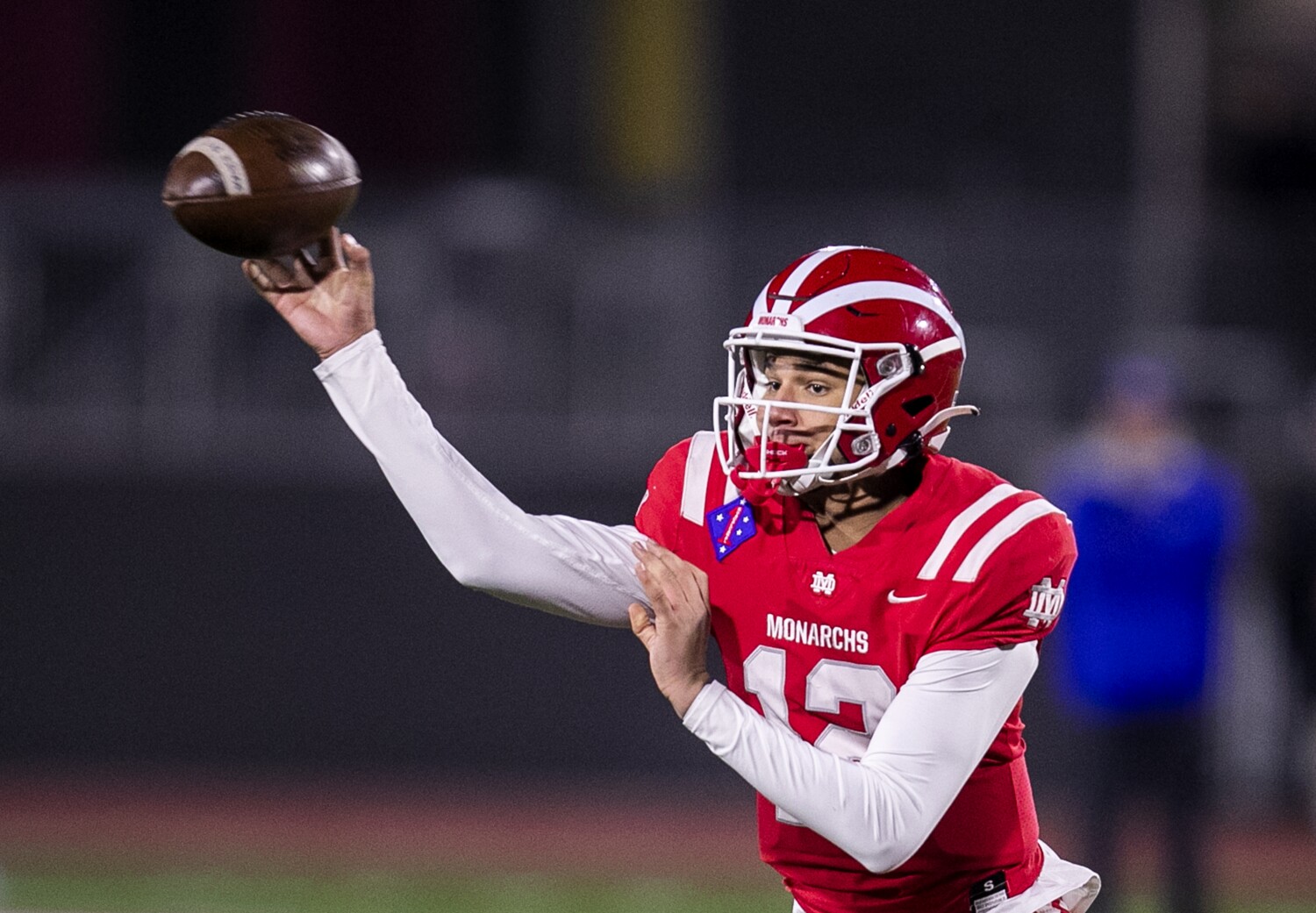 A matchup between powerhouses in a Friday night clash that resembled a heavyweight prize fight had Santa Ana Mater Dei and Las Vegas Bishop Gorman battling down to the wire.

Senior kicker Andre Medina converted a 25-yard, tiebreaking field goal with 3:37 left to give Mater Dei the lead, and the Monarchs stopped the Gaels on fourth down in the final minute, snuffing out a lateral on the final completed pass, to seal a 24-21 victory.

The Monarchs outscored the Gaels, 24-7, after falling behind 14-0 in the first 10-plus minutes of the game. Mater Dei’s defense didn’t force its first Bishop Gorman punt until the 11:01 mark of the second quarter.

Much to the delight of the home fans, the crowd at Fertitta Field serenaded the visiting Monarchs to an “o-ver-ra-ted” chant. Coming into the contest, Mater Dei was ranked No. 2 nationally while Bishop Gorman sat at No. 6.

Bishop Gorman was aided by a fiery defensive attack that didn’t allowed Mater Dei junior quarterback Elijah Brown to find his rhythm early. Brown eventually was able to stand in the pocket and deliver strike and after strike, battling back from several sacks in the first quarter.

Senior wide receiver Jordan Onovughe was his biggest target, reeling in the first touchdown of the game for the Monarchs on a twirling, back-pylon grab with 5:51 to go in the first half. He made a similar catch with less than a minute left before halftime to bring the Monarchs to within striking distance.

Whatever energy that mustered was quickly zapped on the next play when Brown was intercepted in the end zone with just nine seconds remaining on the clock.

That wasn’t the only momentum shift of the game for Mater Dei. Senior defensive lineman RJ Fineanganofo batted a Bishop Gorman pass at the line, hauling it in for an interception. That interception looked as if it would yield points on the return, but Fineanganofo was stripped of the ball inside the 10-yard line, allowing the Gaels to recover.

On the ensuing drive, the Monarchs defense provided several opportunities for the cold Gaels, committing penalty after penalty including roughing the passer. Even with the mistakes, the defense was able to get out of the drive without giving up points, forcing a missed field goal with 6:53 left in regulation.