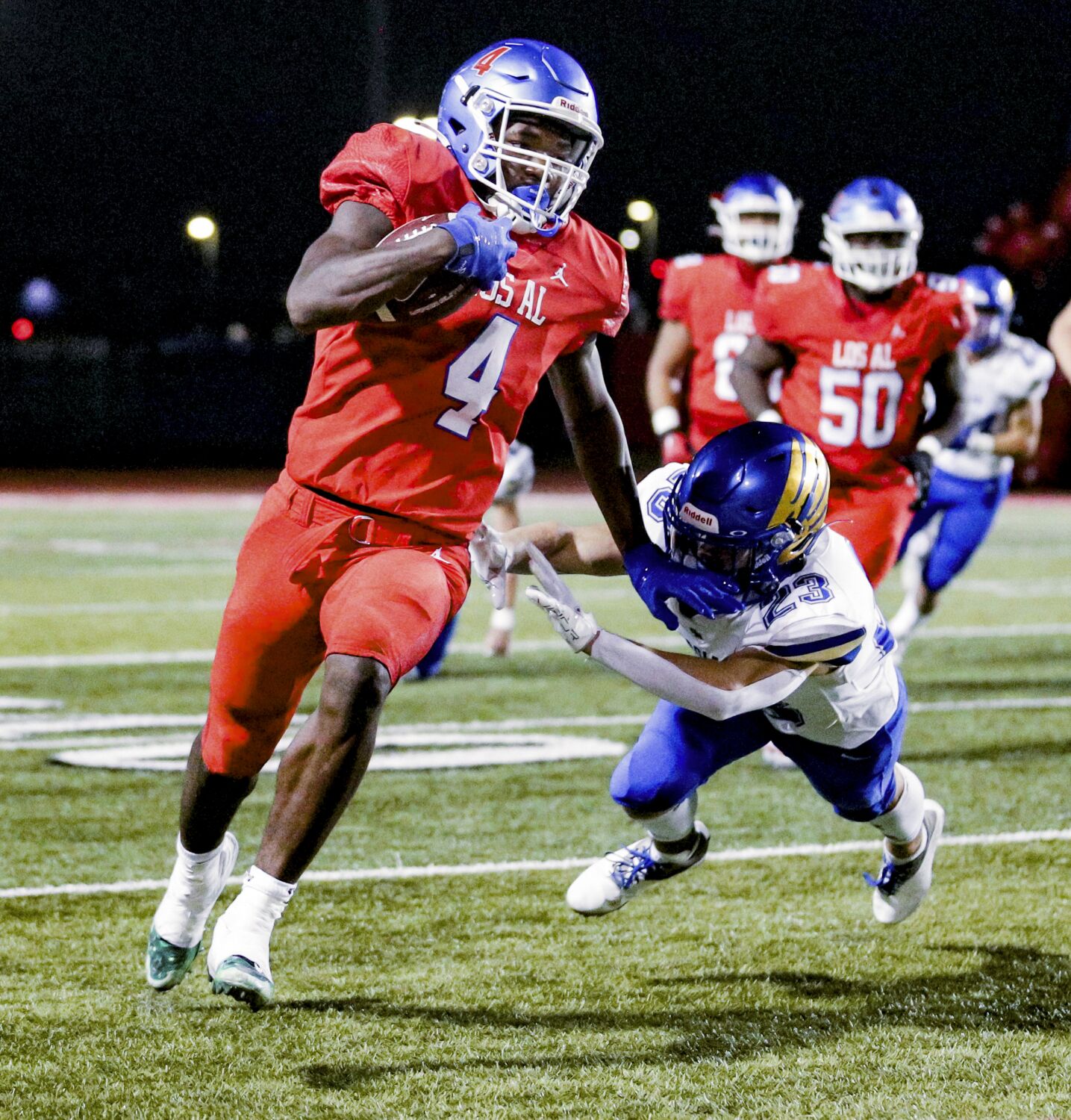 It’s hard to believe there has been a more entertaining first half of high school football this season than what transpired Thursday night at Veterans Stadium in Long Beach. Los Alamitos and Santa Margarita engaged in a wild, back-and-forth 24-minute show that featured players you’ll certainly be seeing on a college field in the future

Whether it was USC-bound Makai Lemon of Los Alamitos turning on a burst of speed to run away from defenders or junior Emmett Mosley of Santa Margarita breaking three tackles for a touchdown, it was pure entertainment.

By game’s conclusion, Los Alamitos had torched the Eagles’ defense for a 69-49 victory.

That’s consecutive weeks in which the Griffins (3-2) have knocked off Trinity League foes.

Last week it was Servite. It’s a sign Los Alamitos can definitely play with the big boys.

Running back Damian Henderson left the Eagles’ defense in tatters, rushing for 303 yards and five touchdowns.

In defeat, Santa Margarita quarterback Jaxon Potter passed for 479 yards and five touchdowns and also ran for a touchdown.

There were seven lead changes in the first half that saw Los Alamitos come away with a 35-30 halftime advantage. In one sequence, Mosley scored on a 63-yard reception, then Lemon returned the ensuing kickoff 95 yards for a touchdown, making it 23-23 in the second quarter.

Lemon had a 65-yard touchdown reception that left six Santa Margarita defenders helplessly chasing him as he ran into the end zone.

Lemon finished the game with 12 catches for 184 yards from USC-bound quarterback Malachi Nelson, who was 16-for-20 passing for 235 yards.

Santa Margarita (3-1) could not handle Los Alamitos’ no-huddle offense that kept getting into a quick rhythm. Los Alamitos’ offensive line was dominant in protecting Nelson.

Los Alamitos received a boost from 6-foot-2, 300-pound freshman lineman Manoah Faupusa, who ran for two touchdowns and scored on a two-point conversion playing fullback in a short-yard formation. He looked like the next Refrigerator Perry.

Los Alamitos held a 50-43 lead after three quarters but took control on the opening play of the fourth quarter when Henderson ran 55 yards for a touchdown.

Santa Margarita was without one of its best defensive players, tackle Collins Acheampong, who suffered a knee injury last week.

You can see why USC coach Lincoln Riley is thrilled to be getting the duo of Nelson and Lemon. Nelson is precise. He was 11 of 14 passing for 189 yards in the first half. Lemon was being used on short passes out of the backfield, allowing him to use his speed to create big plays. The Griffins smartly have a strategy of getting him the ball as much as possible.

Off the field, Los Alamitos found out that top transfer student T.A. Cunningham, a defensive lineman from Georgia, was denied his request for an emergency restraining order in Orange County Superior Court against the CIF Southern Section, leaving him ineligible.

The Southern Section has opened a 510 undue influence investigation into his move from Georgia without his parents and has until Sept. 27 to complete it. The court petition filed by Cunningham’s attorney documented that he came to California lured by promises of name, image and likeness possibilities.

Even though the documentation was designed to gain Cunningham’s eligibility, it could end up having the opposite effect because there remains a CIF rule that states, “A student may not be eligible to participate at the varsity level if there is evidence the move was athletically motivated or the student enrolled in that school in whole or in part for athletic reasons.”

Luca Evans contributed to this report.