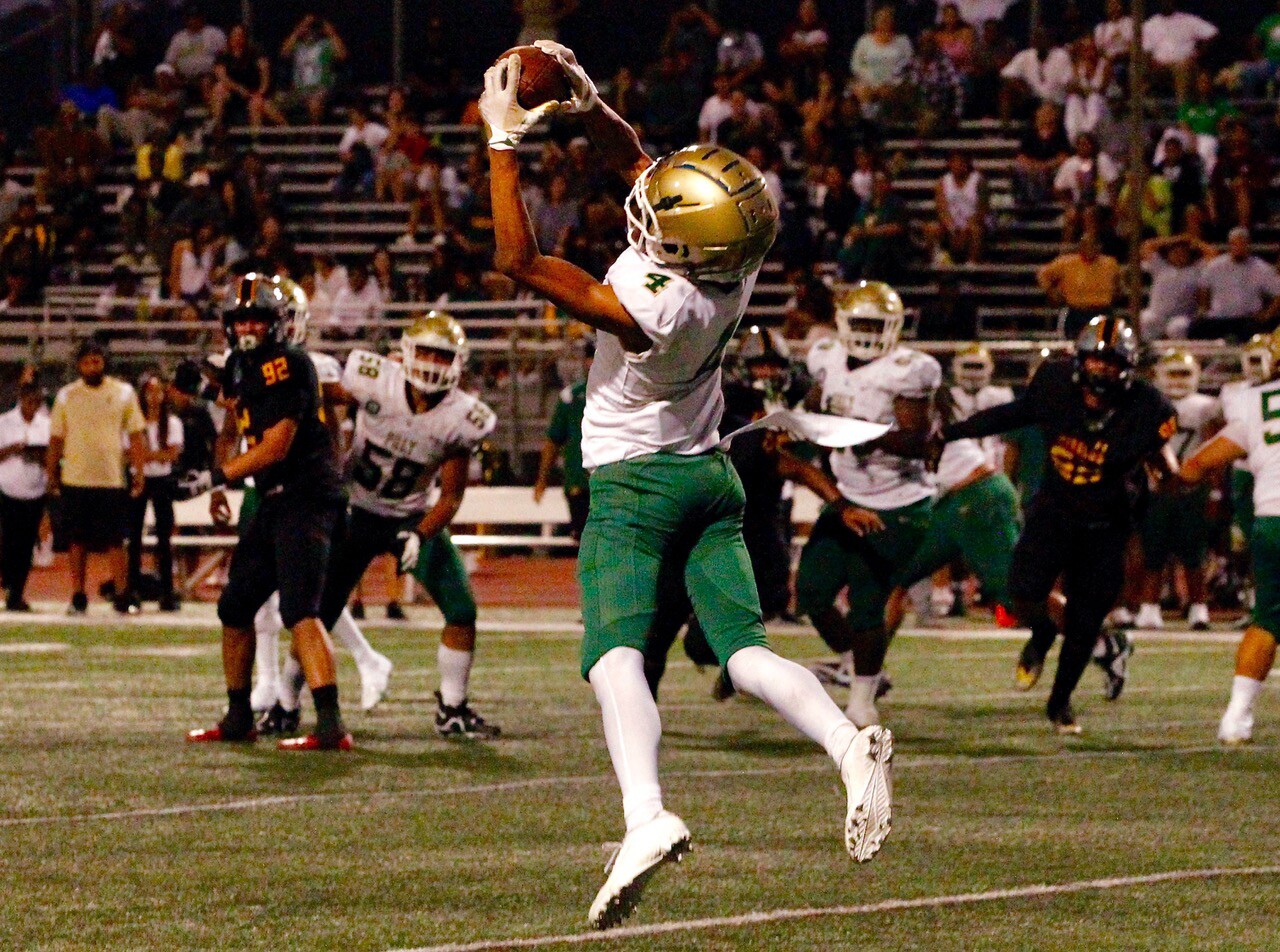 In the “other” big game Friday night, big plays made the difference for Long Beach Poly in a 35-30 triumph over host Mission Viejo. The Jackrabbits were seeking redemption after being held to 161 total yards in a 41-14 loss on their home field at the hands of the Diablos last year.

Devin Samples scored the winning touchdown on an eight-yard run with 21 seconds left. Mission Viejo moved to the Poly 49 before time ran out.

Michael Selgado booted a 25-yard field goal for what proved to be the winning points with 6:39 left and a blocked punt by Joseph Mendez gave the home side the ball back at their opponents’ 14-yard line. However Poly’s defense stiffened and Selgado missed a 36-yard attempt, giving Poly one last chance.

Darius Curry found Jadyn Robinson crossing the goal line for a 16-yard score that gave Poly a 28-27 lead early in the fourth quarter.

The Jackrabbits, No. 8 in The Times’ Top 25 rankings, improved to 2-6 all-time versus Mission Viejo, their other victory a 21-16 quarterfinal upset on the way to winning the Pac-5 championship in 2012, the last of their five CIF titles under Coach Raul Lara.

The first big play was a 56-yard punt by Selgado that pinned Poly back on its own 5-yard line. When the Diablos, ranked fourth in the Southland by The Times, got the ball back they drove 91 yards in 12 plays, scoring the game’s first touchdown on a one-yard plunge by Joseph Mendez on the second play of the second quarter.

Poly answered with an eight-play, 63-yard march capped by Curry’s 12-yard draw. After defensive end Domonic Lolesio tipped a Kadin Semonza screen pass at the line of scrimmage, tackle Phoenix Tusa caught it out of the air and ran 12 yards into the end zone to give the Jackrabbits a 14-7 lead.

Mikey Matthews caught a 22-yard touchdown pass from Semonza to pull the Diablos even at 14-14, then Travis Anderson returned an interception 40 yards to set up a four-yard touchdown run by Chase Valousky to put Mission Viejo back on top.

Anderson picked off his second pass along the sideline at the Diablos’ 15, but Mission Viejo had to punt. Poly crept to within 24-21 on Curry’s 11-yard strike to Jason Robinson midway through the third quarter but Mission Viejo answered right back with a 34-yard field goal by Selgado on its ensuing possession.