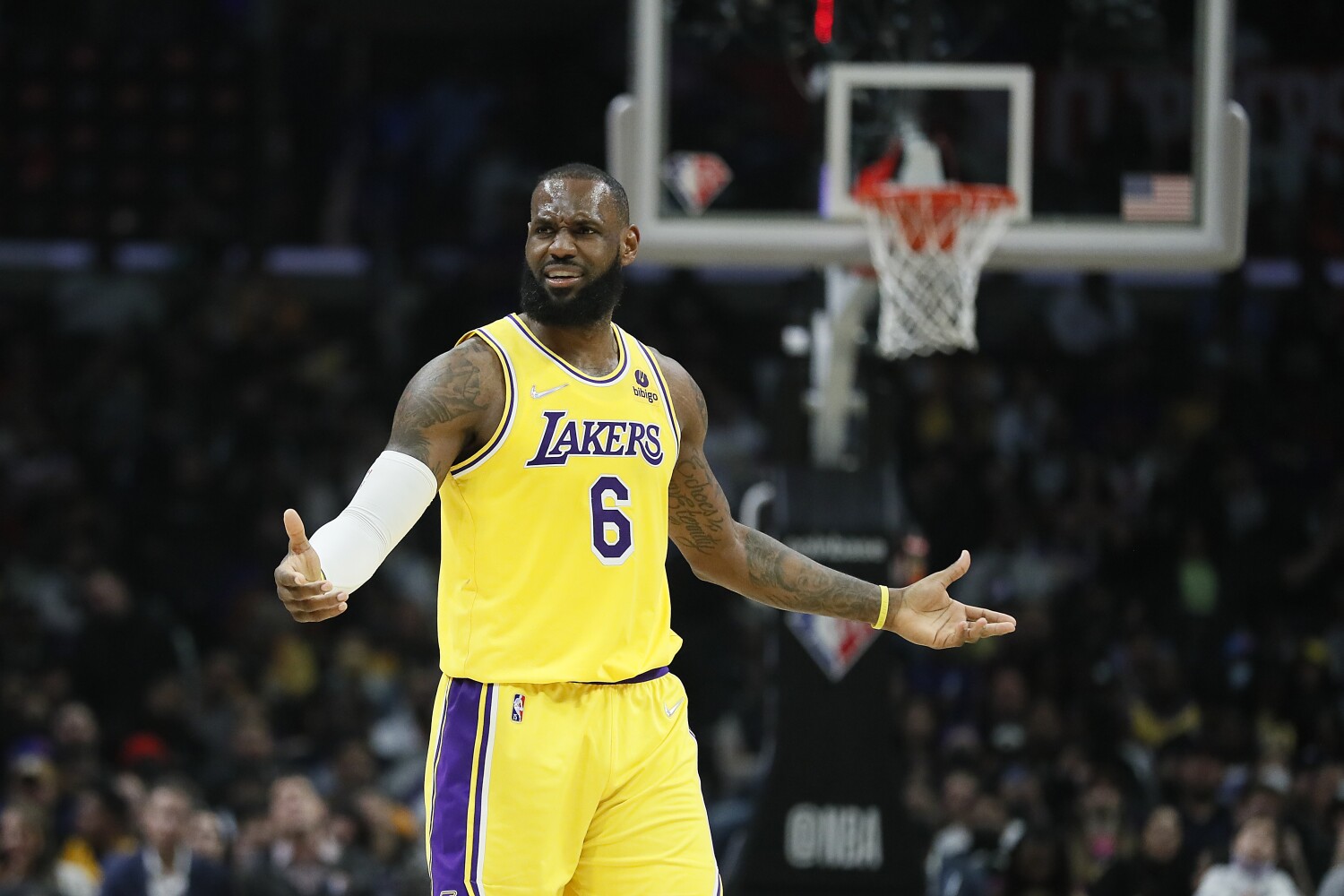 I can’t believe I am saying these words, but Bill Plaschke is 100% correct about the Lakers extending LeBron. They will stay mediocre for the next two maybe three years. Any Laker fan who thinks this is a good idea doesn’t really want to win. I am a longtime fan who watched the ‘80s Lakers and the Shaq-Kobe Lakers compete and win championships. Now we are a sideshow. Sad.

With his new contract LeBron James makes more in 15 minutes than I do all year. The astonishing salaries of many professional athletes makes the actual game in which they participate inconsequential. As Bob Dylan said, “I used to care, but things have changed.”

Arguably the greatest team owner in sports, Dr. Jerry Buss once had a dilemma. The Lakers had two popular, future hall of famers, and one of them had to go.

He made the correct, not easiest decision, for the best long-term good. He said goodbye to Shaq.

This week we are reminded how much we miss the good doctor.

﻿I know Bill Plaschke has unconditional love for the late Kobe Bryant and is not so crazy about LeBron James, but to claim that Kobe’s two-year, $48-million contract in 2013-2014 wasn’t as bad as LeBron’s new contract is more than a bit disingenuous. LeBron has carried the Lakers since he got to L.A. and even won a championship for them in 2020. Kobe played six games in the first year of his contract and 35 in the second year. The Lakers won 27 and 21 games the two years of Kobe’s contract and didn’t even make the playoffs again until LeBron arrived in 2019. If the Lakers have any chance of success this year it will be because of LeBron, who remains one of the greatest players in the league. Without him they’d be lucky to win 20 games.

Thanks, Bill Plaschke, for being “on the ball” regarding LeBron. It’s time to begin rebuilding for the future. There’s no time to waste on a farewell tour for aged players. This includes the self-proclaimed GOAT LeBron James.

I see that the Lakers opened the bank to sign LeBron James to a two-year extension. The last time they did it for an aging superstar with a fragile body, was for Kobe Bryant. And you know how that worked out!

Bill Plaschke’s column on the LeBron James new contract is right on the money. LeBron will play less and less and the team will be deprived of adding two superstars over the next year as it staggers through his contract.

The Lakers are a franchise that can always attract superstars. But apparently better to sell tickets now and kick the can down the road to building a winner. Is this team really any better than the 33-49 it showed it was last year?

How the Kimbrel crumbles

We call Craig Kimbrel “crumble” at our house, and we groan whenever we see him warming up in the bullpen.

C’mon, Dave! Admit that Kimbrel doesn’t have what it takes before he loses one game too many.

Despite having a bullpen stocked with shutdown arms, Dave Roberts continues to stubbornly run Craig Kimbrel to the mound in save situations. If Doc doesn’t realize that Kimbrel’s best years are well behind him, he isn’t paying attention.

When will Dave Roberts ever learn that Kimbrel is not the man for the closer job? Today, Roberts said that while Kimbrel continued to bomb as a lead protector, at least he looked good while losing. I’ll give Roberts one thing and that is his stubbornness in admitting any mistakes in his decisions. Where is the pitching coach in all this… surely he has some input into whether to continue down this path of destruction in snatching defeat from the jaws of victory. I, for one, turn off my TV any time I see Kimbrel enter a game.

We used to think watching Kenley Jansen was like being on a roller coaster. Craig Kimbrel is a nightly journey on the Tower of Terror.

Dave Roberts says he’s “not concerned” with Kimbrel’s performance this year! Well he’s probably the only one in Los Angeles who isn’t.

Coming on the heels of the “Field of Dreams” game last week, it was very nostalgic to see Mookie Betts playing catch between innings with a young fan in Milwaukee who flashed a sign that said, “Mookie, Wanna play catch?” Mookie made a life-long fan last night and showed MLB how easy it is to reach younger fans.

With all due respect to Freddie Freeman, Trea Turner is the most valuable Dodger. His bat and his glove reflect on him as being an absolute magician.

Whatever it takes, the Dodgers should be negotiating with him on a new contract that will keep him with the Dodgers for many years.

I did not understand the Mitch White deal when it happened and after the recent Kershaw and Buehler setbacks I am even more dumbfounded!!

Weighing in on Deshaun Watson

I am disgusted with the actions of the NFL, the Cleveland Browns owners and the Houston Texans in the matter of Deshaun Watson. As the only thing these three entities understand is the dollar, I have decided to make my voice heard by canceling my subscription of more than 15 years to the NFL Sunday Ticket package on DirecTV. Maybe if enough people cancel the NFL will consider moral decency to be more important than the dollar.

Can we trust the numbers?

As someone who wrote a TV-Radio sports column for The Times for 25-plus years, I read Bill Shaikin’s well-researched story on sports talk radio with a keen interest. I tend to agree with AM 570 boss Don Martin that Nielsen numbers are misleading.

Where was everyone else?

I am appalled at reading Steve Henson’s article on Aug. 14, “that Clayton Kershaw was one of about a dozen Dodgers players who took the [Negro Leagues Museum] tour.”

I am so glad the other dozen players are so educated as not to avail themselves of the opportunity to broaden their miniscule (and of course I am being generous) knowledge of baseball history.

Clayton was grateful, he got to learn a lot.

If in doubt that inflation continues, look in Anaheim where people are paying major league prices to watch a minor league baseball team.

How lucky are we in Los Angeles? Helene Elliott — an NHL Elmer Ferguson Memorial Award winner — interviewing Bob Miller — an NHL Foster Hewitt Memorial Award [winner] — talking about Vin Scully — Ford Frick Award winner plus. Sports readers don’t get any luckier than this. Thank you all for your excellent journalism [and] our opportunity to enjoy your skill here in Los Angeles!