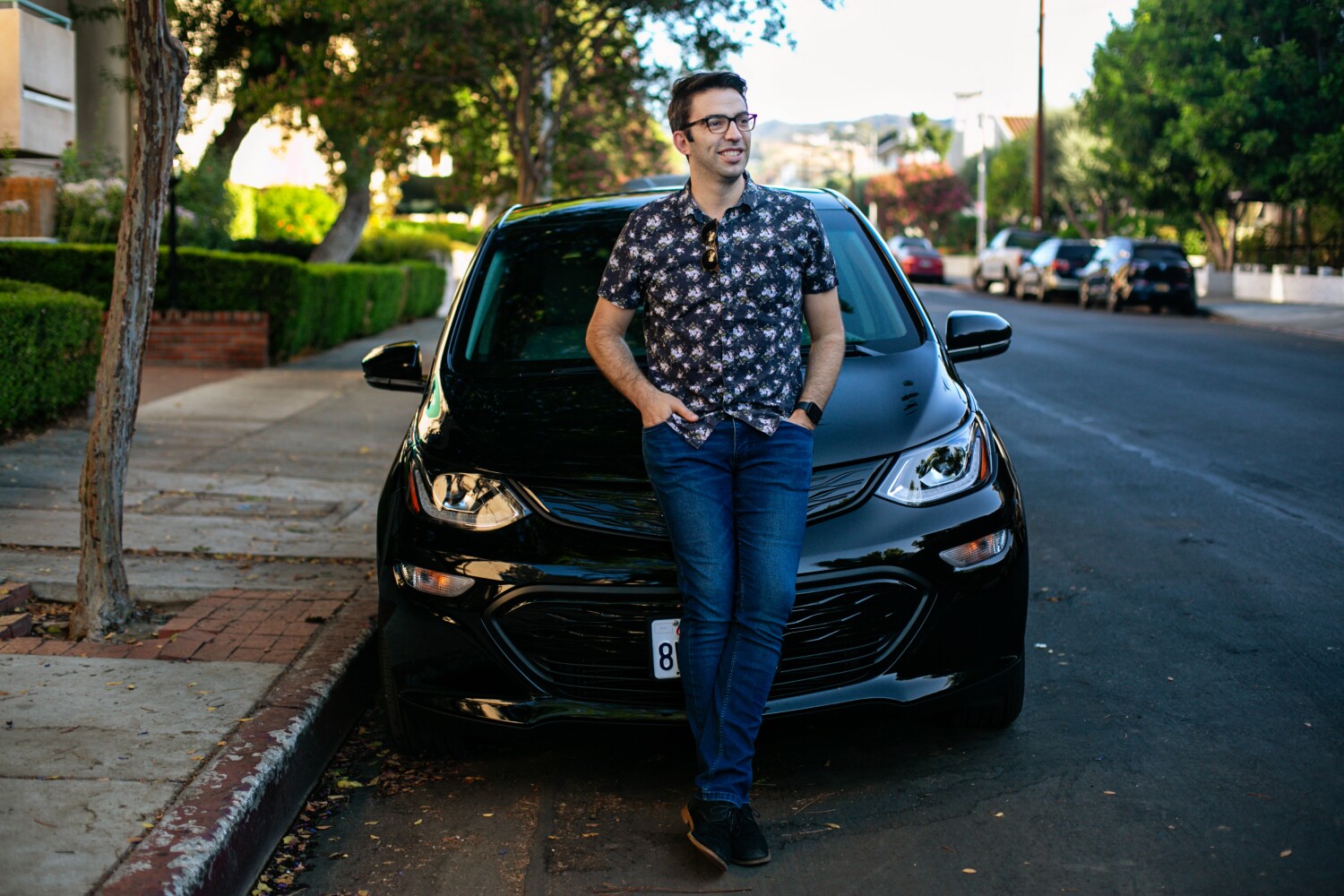 Sam Dudley of Encino knows that California government has gone all in on zero-emission vehicles. So has he. He’s all about cutting back on greenhouse gases.

In May, Dudley splurged on a new electric car, a metallic black Chevy Bolt EV LT. He loves it.

But now it’s July, and the after-school program director, 35, wonders when the state will make good on the EV incentive rebate money it owes him.

He figures he’s due $4,500. He might have to wait until next year for a check to arrive, he said a rebate program representative told him by phone. And, he was warned, he and thousands of others might not get back as much money as promised, or might not receive any money at all.

“They’re not making this easy for the everyday person who is living in California,” Dudley said.

He’s not alone. Dudley’s name sits on a rebate wait list with about 8,000 other California EV buyers.

The long delay might seem counterintuitive. California is the national champion in zero-emission vehicle promotion and air quality regulation. Much legislation has been enacted to encourage the transition to electric transportation, and many billions have been spent.

(Just how many billions is surprisingly hard to ascertain, owing to the wide dispersal of accounting data across various agencies. State Sen. Bob Wieckowski (D-Fremont) has complained that trying to find out is “an Easter egg hunt.”)

Gov. Gavin Newsom even ordered a ban on new sales of internal combustion passenger cars and trucks by 2035.

But the state rebate programs that aim to make zero-emission vehicles more affordable to Californians have been plagued over the years by erratic funding. Rebate coffers are often left empty for weeks or months at a time, forcing qualified car buyers to draw on reserves of their own patience as the state gets its funding act together.

It doesn’t help that figuring out whether a buyer’s income qualifies them for a rebate, or whether the car they want to buy is covered, becomes a complicated and time-consuming endeavor. A welter of different rebate programs with different requirements adds to the confusion.

The programs that must be evaluated: The Clean Vehicle Rebate Project. The Clean Vehicle Assistance Program. Clean Cars 4 All. (“They all sound the same,” Dudley said.) Several air quality districts also offer rebates, which come with their own rules. Electric utilities provide financial assistance for home chargers.

“How is the average person supposed to do all this?” Dudley said. Low-income potential buyers can’t afford to postpone rebates, he said: “Waiting four to six months after purchasing a new EV is untenable for many people.”

Car dealers are frustrated as well. They welcome the rebate programs, of course, but complain there’s so much customer confusion and so much red tape followed by months of delay that the hundreds of millions of tax dollars being spent aren’t as effective as they might be. (The Rebate Project has paid consumers nearly $1 billion so far.)

“The more complicated it is, and the more delays there are, the more difficult it is for consumers to navigate these programs,” said Brian Maas, president of the California New Car Dealers Assn. “You want to make it as simple and easy as possible, and you want to [pay the cash rebate] as close to point of sale as you can,” he said.

The key problem is unpredictable state funding. The Clean Vehicle Rebate Project ran out of money in April. The Assistance Program, intended to help low-income buyers purchase an EV, ran out of money in March. Applicants were put on a wait list, but a spokesperson for the state’s Air Resources Board said with funds exhausted and no new money on the way, the Assistance Program “might have to close the list.”

The Rebate Project, though, is the big kahuna. It’s financed with state general funds and by the state’s greenhouse gas reduction fund. The state Legislature depends on inherently uncertain forecasts for EV sales to decide how much money to allocate; if forecasts are too low, the money runs out. The size of the greenhouse gas fund, financed by state cap-and-trade energy permit auctions, can rise and fall like a yo-yo, causing periodic refund delays that can last for three months or more.

Wouldn’t an increased gasoline tax accomplish the same goal — making it more economical to buy a zero-emissions car — without all the complexity? Yes, said Denny Cullenward, an energy economist and coauthor of the book “Making Climate Policy Work.” But it’s a political nonstarter: “The last thing anyone wants to do is be the politician that sets the price of gasoline.”

A carbon tax was considered under the administration of former Gov. Jerry Brown, but didn’t draw legislative support. That’s how the state’s greenhouse cap-and-trade system came about, as a carbon tax alternative, Cullenward said. He’s a big proponent of clean-vehicle rebates and other incentives but called the current state of California’s myriad programs and the way they are administered “a nightmare.”

The new state budget signed by Newsom on July 16 provides $525 million for rebates; $100 million of that comes from the greenhouse fund. “Staff are working to finalize grant documents that would allow a portion of the allocation to be infused into the program now to cover the wait list and the remaining allocation will be added to the program once staff brings their proposal to the Board for approval this fall,” the Air Resources Board spokesperson said by email.

Potential electric car buyers who turn to the Rebate Project website see an image of a highway-style triangle warning sign and a message that says it will take “several months” before rebate money is distributed. The message also cautions that rebate “terms and conditions” might be changed by the time the money becomes available. “As a result,” it says, “there is no guarantee that you will be eligible for a rebate.”

Meanwhile, the state is evaluating the structure of its rebate programs. There could be dramatic changes in store. Or not.

A Newsom plan to issue $1 billion in government bonds would provide incentives for sales, purchases and deployment of electric vehicle charging stations. The $66 million in annual interest payments would be financed in part by extending motor vehicle fees now due to expire in 2024.

As electric cars take a bigger share of the market, state incentives might have to shift from cars and trucks to public chargers, an official with the California Energy Commission said at a state Senate budget hearing earlier this year.

Patty Monahan, the commission’s head of transportation, noted that the cost of electric vehicle batteries has fallen dramatically over the last decade — within the next few years, electric vehicle costs are expected to match internal combustion equivalents, making vehicle incentives less essential for all but the lowest-income buyers.

“Now the barrier is, ‘I live in an apartment building and I don’t have a place to charge my vehicle, so I’m not going to get a zero-emissions vehicle.’ … We want to make sure no matter where you live you’re going to have access,” Monahan said.

The increasing popularity of electric cars — there are now about 800,000 on California roads, and electric passenger vehicles total more than 8% of the new car market — means rapidly rising costs for the state. If left in place, the rebate program costs would run to several billion dollars a year later in the decade.

The Air Resources Board is considering rebate program alternatives that range from changing income requirements for buyers to putting a ceiling on the number of rebate-qualified cars a manufacturer can sell to eliminating the rebate program altogether.

How much attention consumer confusion will get is unclear. And consumers aren’t the only ones dealing with red tape. Sellers and buyers of zero-emission trucks and buses must navigate an array of different programs in different agencies.

The state budget includes $3.9 billion to be spent on zero-emission vehicle programs over the next three years. There are 29 state agencies and sub-agencies that have a stake in that money.

State Sen. Henry Stern of Calabasas is pushing a bill that would create an executive director position that reports to the governor to coordinate those programs.

Bolt buyer Dudley wants to make clear that although he thinks he’s getting the runaround by rebate officials, “everyone I’ve talked to has been sympathetic.” It’s not the people he’s upset with, he said; it’s the system.