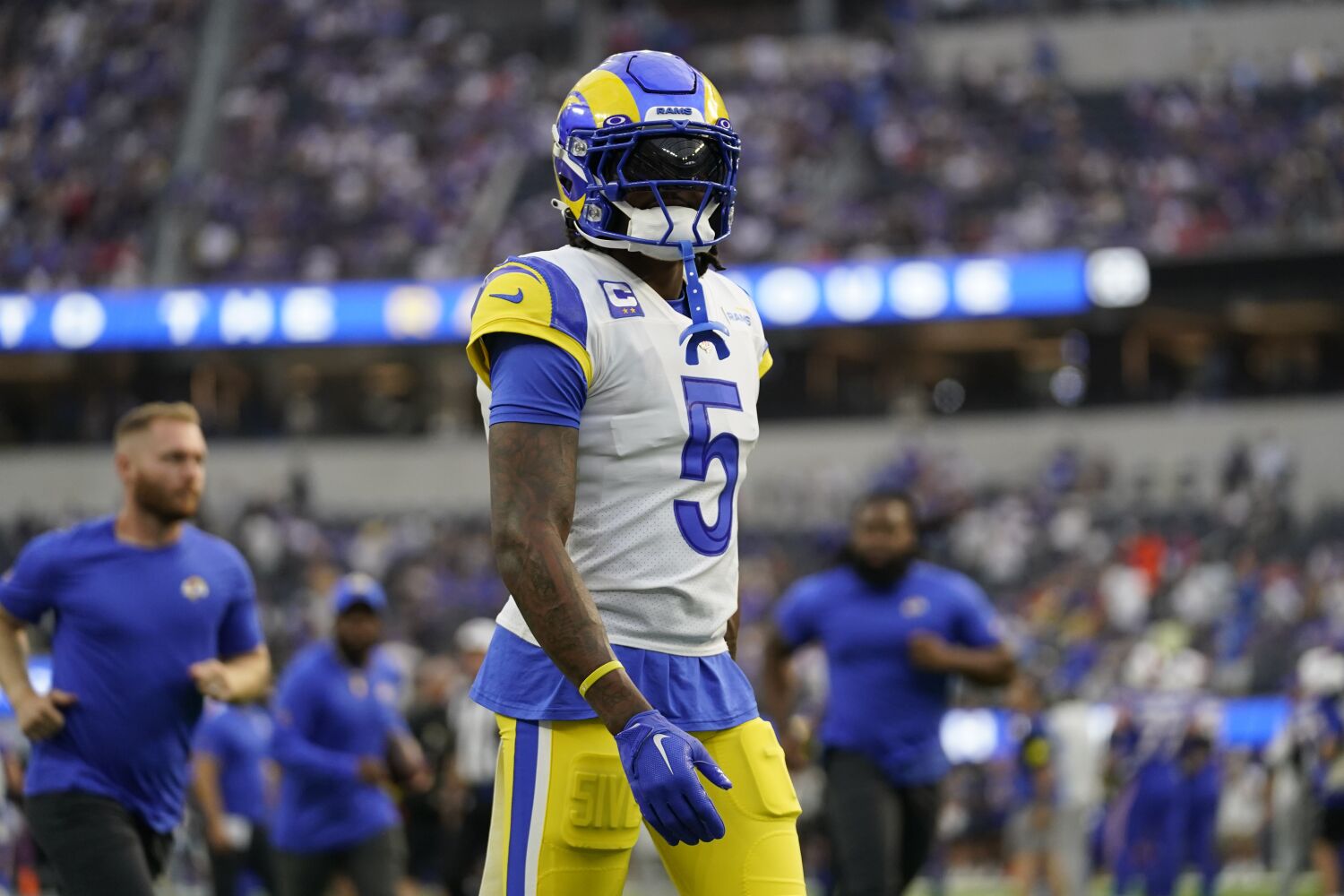 The visit was unexpected but welcome.

This week, in the aftermath of the Rams’ embarrassing season-opening loss to the Buffalo Bills, Rams star cornerback Jalen Ramsey said defensive coordinator Raheem Morris dropped by his house to check in. Ramsey and Morris sat outside for about 20 minutes chatting.

“Just gathering thoughts, just making sure everything was cool,” Ramsey said Friday. “Making sure my mind was right because he knows how hard I am on myself.”

Ramsey, a three-time All-Pro and one of the NFL’s highest-paid cornerbacks, is his own harshest critic. So he said he is not bothered by barbs from others.

Many came his way, especially on social media, after the loss to the Bills, who challenged Ramsey from the outset. Receiver Stefon Diggs made several plays, catching eight passes for 122 yards, including a 53-yard touchdown.

“I take it as a compliment that people don’t think I ever played a bad game,” Ramsey quipped, before explaining that no one could be harder on him than himself.

“There’s never anything anybody can tell me that I haven’t already told myself — times 10 probably,” he said. “Like, I cuss myself out in my mind like worse than anybody I could ever speak to.

“Just how I am, and the standards I hold myself to and just how much I care.”

In 2019, the Rams sent two first-round draft picks to the Jacksonville Jaguars in a trade for Ramsey. Before the trade, Ramsey said he was in “a bad space.”

The defending Super Bowl champion Rams will attempt to regroup on Sunday when they play the Atlanta Falcons at SoFi Stadium.

Three years ago, Ramsey made his Rams debut against the Falcons. On Friday, he recalled working with former defensive backs coach Aubrey Pleasant to prepare for a matchup that included man-to-man coverage on star receiver Julio Jones.

“I was staying up all night watching film with coach Pleasant and trying to figure out exactly where I would fit into the defense and my opportunities that would come during that game,” he said.

Ramsey made a strong impression. He helped limit Jones to six catches for 93 yards in a 37-10 Rams victory. Jones made some of his catches after Ramsey was out of the game.

Before the 2020 season, the Rams signed Ramsey to a five-year, $120-million contract that includes $71.2 million in guarantees, according to overthecap.com. He has been an All-Pro in each of the last two seasons and helped the Rams win Super Bowl LVI.

Now he plays against the Falcons again.

“A lot has happened, right, in my personal life, in football, a lot of growth has happened,” he said. “Some mistakes have came along the way, just like my whole journey, it’s been crazy since then.

“But I wouldn’t change it. I don’t regret anything. I loved every minute of it — I’m happy that all of that has brought me to where I am right now.”

Morris expects that Ramsey will bounce back on Sunday.

Like other elite Rams players such as defensive lineman Aaron Donald and receiver Cooper Kupp, Ramsey had “instances” against the Bills where they “were trying to do right and pressing a little bit,” Morris said.

“One of my favorite things about it is that he had great accountability,” Morris said of Ramsey, adding, “Have the utmost confidence and faith in Jalen, and I know he’s looking forward to being able to play his kind of game this week.”

Outside linebacker Leonard Floyd (knee) did not practice and is questionable against the Falcons, according to the Rams injury report. Offensive tackle Joe Noteboom (knee) and long snapper Matthew Orzech (calf) were limited and are listed as questionable. Receiver Van Jefferson (knee) and center Brian Allen (knee) did not practice and will not play.