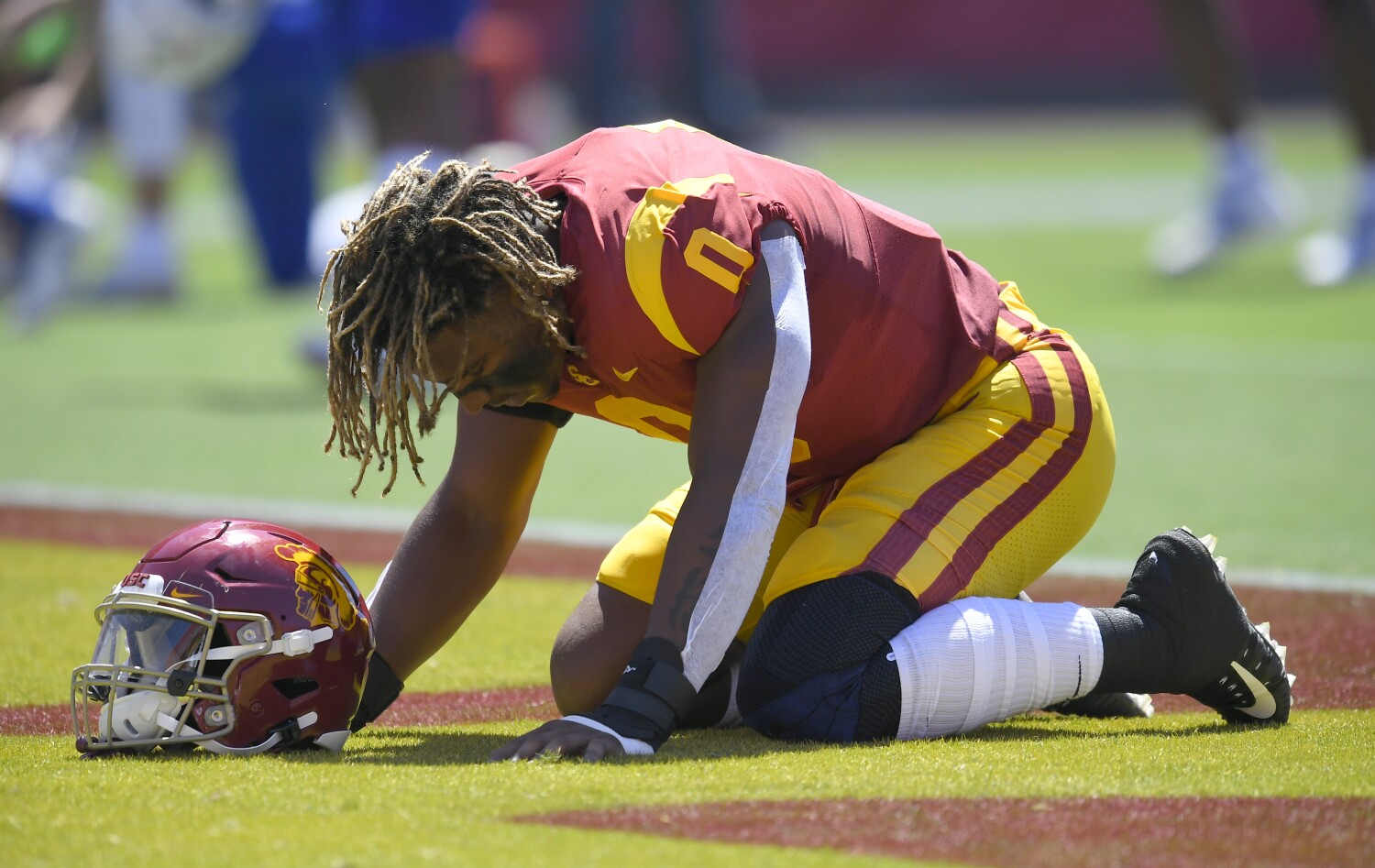 A new season and a new staff was supposed to equal a fresh start for Korey Foreman. But through two crucial weeks of USC’s preseason camp, the former No. 1 overall recruit has barely had the chance to get started.

An undisclosed injury has kept Foreman sidelined since last week. Before that, he missed time for what USC coach Lincoln Riley called “a prior commitment.” Altogether, he’s sat out most of the Trojans’ camp so far — after missing the start of spring practice with an injury too — leaving minimal opportunities for him to make any sort of impression on USC’s staff ahead of the season.

“Is that a concern, Korey missing that? Sure,” Riley said on Tuesday. “But I want to make the point, it’s not because it’s Korey, it’s because it’s a player on the USC football team.”

Few other USC players, though, arrived with anywhere near equal hype to Foreman, whose signing was seen as such a watershed moment for USC’s football program that it was commemorated on a campus billboard. After a frustrating freshman year that saw him used only sparingly, this season is a crucial one for the former five-star recruit and his trajectory under Riley.

Fortunately for Foreman, there’s not much of a depth chart at rush end to challenge him for playing time at the moment. Auburn transfer Romello Height also sat out most of practice this week with an undisclosed injury. He spent most of the portions of practice open to the media in a gold, noncontact jersey.

Beyond those two, USC has just three players listed as rush ends on its roster, one of which (Solomon Tuliaupupu) also hasn’t been practicing because of injury. The other two — Devan Thompkins and walk-on Garrett Pomerantz — are freshmen.

Others, like defensive end Solomon Byrd and inside linebacker Julien Simon, have had to move to join the fray. Even standout defensive end Tuli Tuipulotu has shifted outside at times to bear some of the pass rushing burden.

No one is panicking about the position just yet. But that paper-thin depth is becoming more of a problem for defensive coordinator Alex Grinch with each passing practice.

A little more than two weeks separate USC from its opener against Rice, leaving Trojans rush ends coach Roy Manning only a handful more days to determine who deserves to start at the position. Height is the presumptive favorite after a standout spring, but he hasn’t solidified that spot entirely. No one has, Manning said.

“The reality is none of them have done anything in terms of the large scheme of things, so they all should have a chip on their shoulder,” Manning said.

For Foreman especially, the next two weeks should be telling. On a defense in desperate need of edge rushers, his talent alone could still make him USC’s missing piece in the pass rush.

Either way, the clock is ticking on the Trojans defense to figure it out.

“That position has to be shored up here really quick,” Grinch said, “or it’s going to be an interesting first couple weeks.”