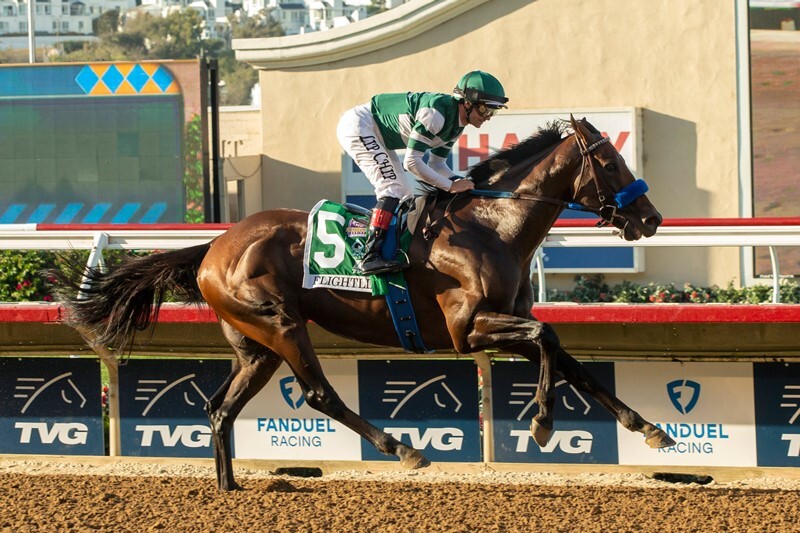 The doubts have been removed. The questions have been answered. Flightline is the most dominating horse to come along in a very long time.

His latest tour de force was Saturday when he won the $1 million Pacific Classic at the Del Mar Thoroughbred Club. The winning margin was an extraordinary 19¼ lengths, meaning he has won all five of his starts by a combined total of 62¾ lengths or about the length of 1¾ football fields.

Some had wondered how the 4-year-old colt would do going around two turns for the first time. Others questioned if he could go as far as 1¼ miles. And then there was the idea of how a horse this inexperienced could win a race this big. All questions were answered with a giant and resounding yes.

Flightline didn’t break especially sharp but climbed into the second spot by the clubhouse turn. By the middle of the backstretch he had passed the early leader Extra Hope. Entering the stretch he was leading by 13 lengths as jockey Flavien Prat just rode him without urging as he sailed past the finish line as a crowd of 12,077 cheered wildly.

“I was feeling good,” winning trainer John Sadler said as Flightline entered the stretch. “I was thinking do I watch him to the finish or head down the stairs [to the winner’s circle]? I watched him to the finish.”

Prat acknowledged he wasn’t even riding him hard in the stretch.

“When we went into the final turn, he was traveling so well I asked him to pick it up a little bit,” Prat said. “As soon as I looked back and saw how far in front he was, I wrapped up on him. Obviously, this is the best horse I ever rode.”

The win gives him a free pass to the Breeders’ Cup Classic on Nov. 5 at Keeneland Race Course in Lexington, Ky. He will not race before then.

“You saw a really top horse run against some very good horses,” Sadler said. “We’ve always felt he’d be better the farther he ran. He was bred to run a classic distance. Because of his setbacks early in his career, he hasn’t run at this distance until now. Remember this is just his fifth race, which makes it so special.”

Flightline’s lack of races is because of three non-life-threatening injuries. When he was a 2-year-old, he severely cut part of his hind quarter when he ran into a fence even before he started training. Then, last year, he bruised his foot when he arrived at Del Mar, delaying his second start. And, earlier this year he suffered a hock strain.

“He’s just a special horse and what makes him so special is he’s just one of those rare shooting stars,” Sadler said.

Joe Harper, who has been the chief executive at Del Mar since 1990, said it was “the best performance he’s ever seen at Del Mar. There have been a lot of great horses race here but this one is something special. You can tell a superstar when you see one and he’s one of them.”

Everyone was wowed by Flightline’s performance, even those whose horse finished far back. Bob Baffert, trainer of second place Country Grammer, said he was so far out of the picture that he suspected his horse thought he won.

“I’ve seen a lot of wows down here and that was one of them,” Baffert said. “He was spectacular. I had to stand up a cheer and clap for him.”

Racing has a history of retiring its stars rather than racing them, but that might not be the case here.

“He’ll go to the Breeders’ Cup and then we’ll have a meeting and talk about what’s after that,” Sadler said. “We haven’t decided. I believe the ownership is open to racing him next year [as a 5-year-old] because he’s so special. So, when you read these articles that say he’s going off to stud, don’t buy it. We really can’t decide it now. There’s plenty of time for that.”

Flightline is owned by five different groups. Kosta Hronis, Sadler’s most successful client, has mostly been the frontman for the consortium.

“I said after the Malibu at Santa Anita [which he won by 11½ lengths] that we want him to be America’s horse and we want to share him,” Hronis said. “So, we’re hoping that everybody will fall in love with him.”

Saturday’s performance likely did a lot to make that happen.