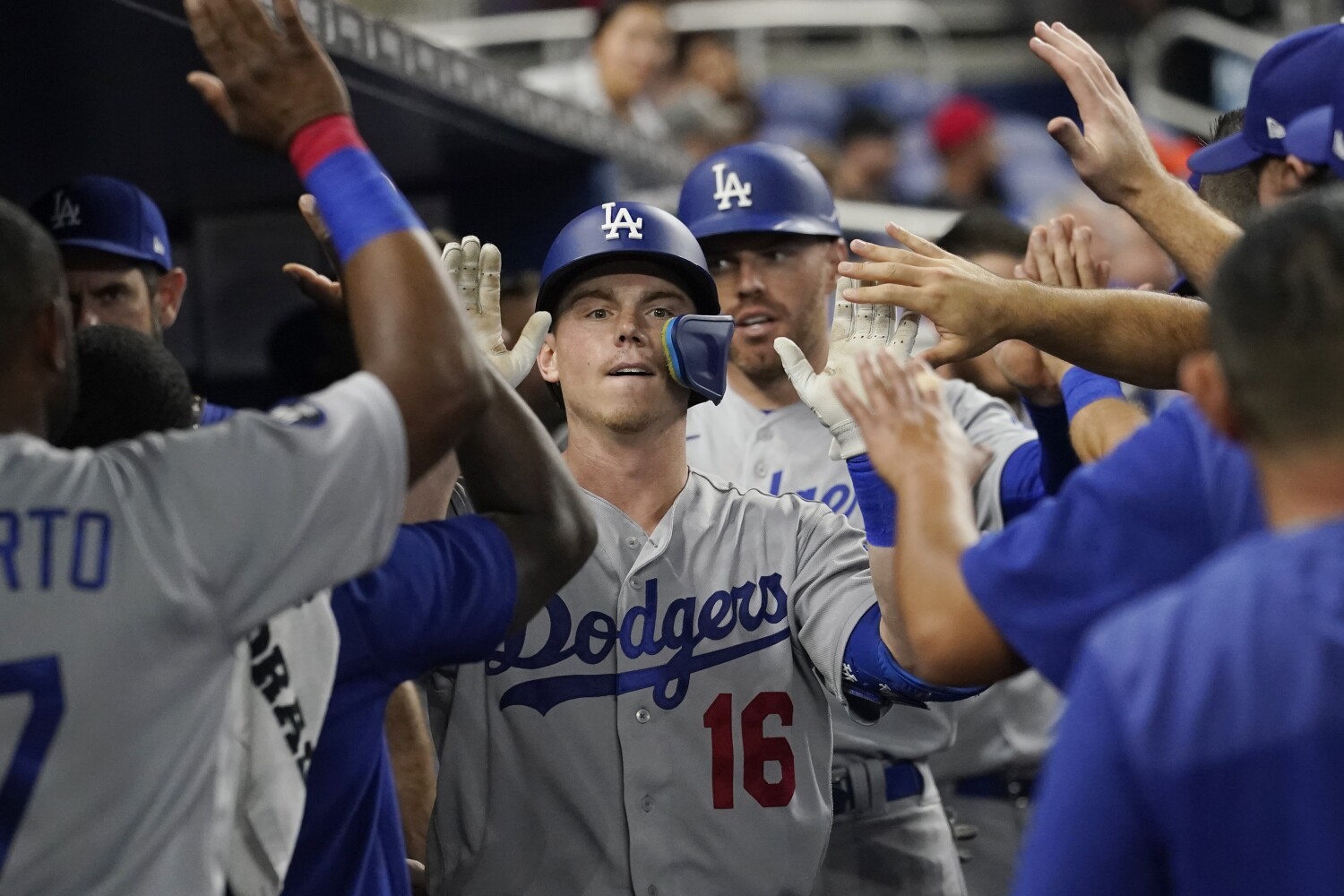 It’s not yet September, but the Dodgers’ magic number to clinch the National League is already down to 15.

Their lead for the majors best record is eight games.

And, short of a potential push for MLB’s all-time wins record of 116, there doesn’t appear to be much drama remaining in the Dodgers’ remaining regular season slate.

The three-game series in New York against the Mets that begins Tuesday should be a rare exception.

Despite trailing the Dodgers by eight games for the National League’s top playoff seeding, the Mets loom as perhaps the most formidable challenge in the team’s quest for the pennant, thanks to a versatile lineup and top-heavy pitching staff.

“I’m looking at it as a potential opponent down the road,” Dodgers manager Dave Roberts said. “It’s going to be a fun series.”

Ahead of the three-games in Queens, here are five takeaways on where the Dodgers stand.

The Dodgers have had plenty of feel good stories in their lineup this year.

Right now, Chris Taylor is not one of them.

In the first year of a four-year, $60 million contract, the utility man has battled injuries, inconsistent production and, especially of late, a skyrocketing strikeout rate that has Roberts concerned.

“The strikeout rate, the swing-and-miss rate, is alarming,” Roberts said. “I know he’s not trying to swing and miss, trying to strike out. But I think for me to feel confident to run him out there more consistently, it’s just got to get better. And I know he understands that too.”

Taylor, who turned 32 on Monday, has always had swing and miss in his game, with a career strikeout rate of 28.6%. But usually, it’s been palatable, balanced out decent power and a consistent ability to still get on base.

This year, however, his numbers are skewing in the wrong direction.

On the season, his strikeout rate is 36.6%, the highest in the majors among hitters with 350 plate appearances. Since returning from a foot fracture earlier this month, he’s struck out 30 times in 73 at-bats. During the four-game series at Miami that concluded Monday, Taylor went two for 12 with six strikeouts, dropping his batting average to .227.

It has coincided with other statistical drop-offs, as well.

“It’s kind of been [a struggle] all year,” Taylor said. “But it’s been a little tougher recently.”

Roberts said, for now, Taylor will continue to get consistent at-bats, hopeful he can work through mechanical issues the manager believes are at the root of the problem.

“It’s certainly not lack of effort,” he said. “I expect he’ll work through it.”

But, Roberts also warned, “If you’re not getting that [consistent power and contact] and the strikeout rate spikes, it’s just hard to stomach. So some level of consistent contact is what we’re all looking for.”

Taylor acknowledged he is “missing balls that I don’t normally miss.” He also conceded that, while he’s been prone to cold stretches throughout his career, this slump is starting to feel extreme.

However, he also remains hopeful of a turnaround, drawing a comparison to last year when he slumped down the stretch of the regular season before becoming one of the Dodgers’ most clutch performers in the postseason.

“It happens every year where you go through phases,” he said. “This year, it’s been a little bit more than years past. But it’s not like a new feeling.”

The clock is ticking for him to figure it out.

Roberts didn’t shy away from the possibility of facing the Mets in the postseason. As such, he noted that there could be strategic gamesmanship at play to hide information in case the teams do meet in the playoffs.

“I think you approach the series different, in the sense that it’s a team you could potentially see in October,” Roberts said. “I try to keep that in my mind when I’m watching tendencies and what guys are doing, to then take what you get to kind of cross-check.”

Asked if he might try avoiding specific matchups this week that could arise in October, Roberts smirked.

The Dodgers already know who they will face (Taijuan Walker on Tuesday, Jacob deGrom on Wednesday, Chris Bassitt on Thursday) and who they won’t (Max Scherzer was pushed back a day and will miss facing his old team).

The Dodgers still have one big pitching decision to finalize, with their starter for Thursday remaining to be announced.

While it seems likely that Clayton Kershaw could make his return from the injured list that day, Roberts didn’t eliminate the possibility that Dustin May could start on normal rest in the series finale instead.

When the Dodgers traded for Trayce Thompson in June, they were hoping the right-handed hitter could become a weapon against left-handed pitching.

So far, he’s done the opposite.

In what’s been a breakout performance from the 31-year-old journeyman slugger, Thompson’s most success has come against right-handed pitching — something he struggled with earlier in his career.

Thompson hasn’t had much of an explanation for the extreme splits, saying last week he feels comfortable against pitchers of either hand.

Roberts hasn’t yet pinpointed a cause either.

“I think we’re all surprised by it,” Roberts said. “I do think the numbers versus left will correct itself a little bit. And hopefully the numbers versus right don’t self-correct either. Regardless, when he’s in there I feel good. He’s earned some opportunities, so I’m trying to get him in there when I can.”

Trea Turner is hoping his 1,001th hit looks prettier than his 1,000th one did Monday night.

In a milestone moment, Turner reached the career 1,000 hit plateau on an infield single that set up the Dodgers’ eventual winning run in the 10th inning.

With the ball in his locker postgame, he laughed about the play, a dribbler up the third-base line that gave him enough time to race to first safely, before reflecting on what it signified about his eight-year career.

“It’s something I think I was looking forward to, because my parents were here and my Dad’s been counting down, so it’s good to get it in front of them,” Turner said. “Glad I could do that, but hopefully many more in the tank.”

With two hits Monday, Turner kept pace with teammate Freddie Freeman in the race for MLB’s hit lead. Freeman currently leads the majors with 163 hits. Turner is second with 161.

The Dodgers will likely get one bullpen boost this week, with Blake Treinen on track to return to the team Friday after missing more than four months with a shoulder injury.

During a rehab assignment with triple A Oklahoma City this week, Treinen pitched in back-to-back games for the first time, bouncing back from a two-run, three-hit, one-out clunker to pitch a scoreless inning in his second appearance — during which his fastball averaged more than 97 mph.

Treinen is scheduled to make one more rehab appearance Tuesday before coming off the injured list. He’s allowed two earned runs while striking out six and walking one in five innings across six appearances during the rehab assignment.

The right-hander will be free to pitch in back-to-back games, but Roberts said he’ll try to avoid using him for more than one inning at a time.

Once Treinen returns, the Dodgers will have four relievers on the injured list: Tommy Kahnle, Victor González and Danny Duffy (who are all on rehab assignments), as well as Yency Almonte (who has yet to throw a bullpen since going on the IL with elbow tightness earlier this month).