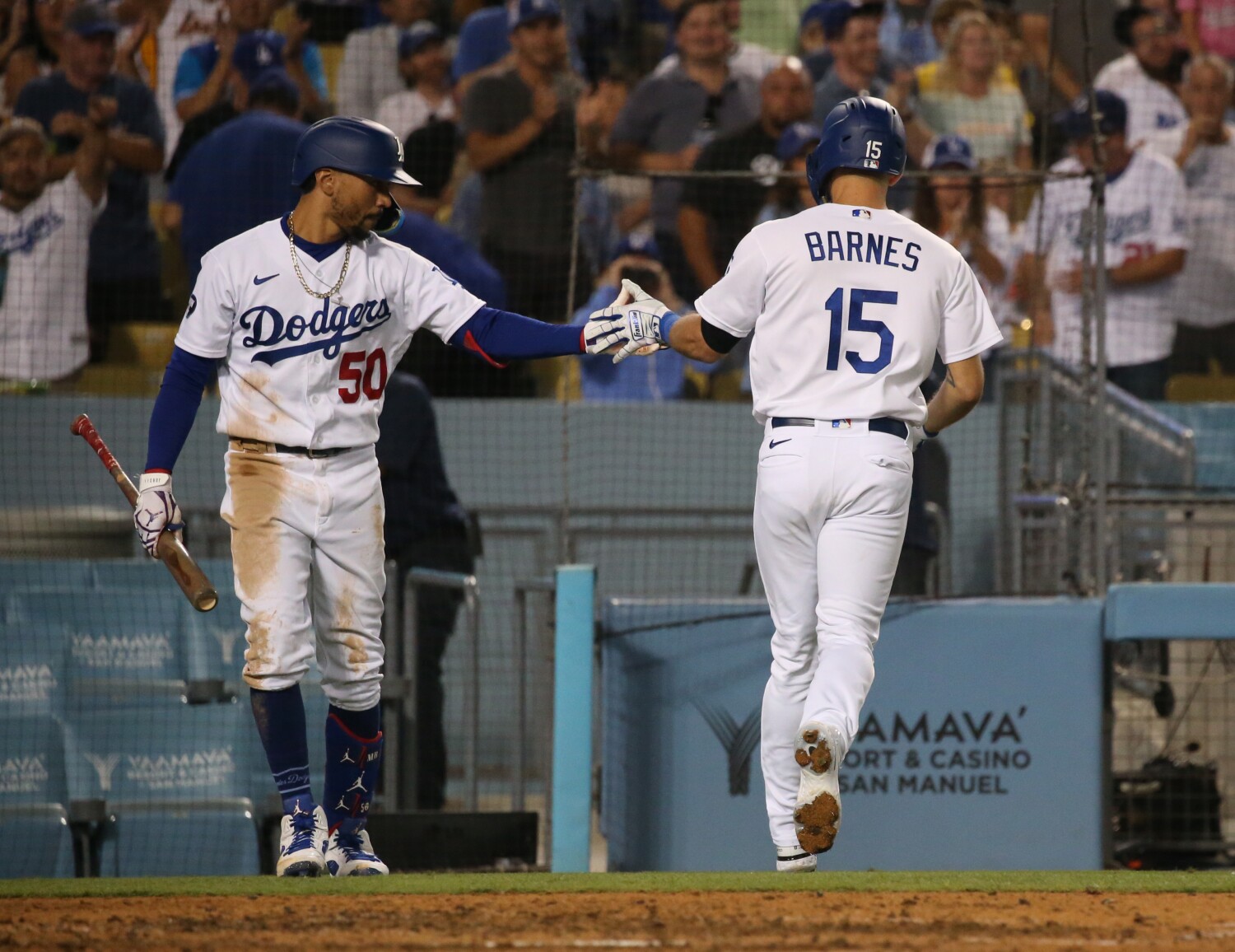 It feels weird issuing this plea to a baseball team bullying its way toward historic ground, but, sorry, somebody has to say it.

The hotter-than-hot Dodgers — who lead the National League West by a compelling 19½ games with an astounding run differential of 275 after Wednesday’s 12-6 win over the Milwaukee Brewers — need to start playing it cool.

They can eclipse the 2001 Seattle Mariners record of 116 victories by winning 31 of their last 39 games, but they shouldn’t even try.

They should also blow off any heated pursuit of the Dodgers’ franchise record of 106 wins, set in 2019 and 2021. They will probably stroll there anyway because they need to go just 20-19, but it should not be a priority.

Those mighty but exhausted Mariners lost to the New York Yankees in the American League Championship Series. Those great but weary Dodgers teams failed both times to advance to the World Series.

History shows that the smartest thing these Dodgers can do at this point is to pack away the summer clothes and start getting dressed for October.

After all, in his infamous utterance this spring, manager Dave Roberts didn’t guarantee record-setting victories, he guaranteed a World Series championship.

Now that they’ve essentially clinched a division title, their sole focus should be setting up their bullpen, adjusting their rotation and resting their starters in pursuit of Roberts’ promise.

Doing everything possible to win every game possible? Meh.

As for chasing home-field advantage, well, the Dodgers can currently clinch that advantage throughout the playoffs by just treading water and, besides, they’re easily good enough to win it all without it.

“I don’t think most guys know the win record … whatever it is,” said Roberts on Wednesday. “Our goal is to win a championship. So, however that looks, that still remains top priority.”

Glad he agrees. Hope the philosophy sticks as the Dodgers will plow through a final month against enough inferior competition that they could be tempted to chase the fool’s gold.

When asked if he knew the Mariners’ wins record, Roberts recited “116” immediately.

“I know it,” said Roberts. “But it’s not something I’m spending a lot of time thinking about.”

Good. Five seasons ago he also didn’t think about it as the team moved into late August with a 21-game division lead. At that point, they tanked, going 13-22 in their final push, including losing 16 of 17 games in one indifferent stretch.

Did the defeats defeat them? Hardly. Refocused by a workout pep talk from Rich Hill, the Dodgers lost only one game in their first two playoff series and would have won the World Series if not for those cheating bums known as the Houston Astros.

This Dodgers team is better than those 2017 Dodgers. This is arguably the best regular-season team the Dodgers have fielded in more than 50 years.

They now need to make sure the magic doesn’t get unmasked before Halloween. They need to use this next month to stock their cellar and fix their shutters and prepare for the storm.

Everyone knows it won’t be Craig Kimbrel. Even Roberts admitted it wasn’t guaranteed to be Kimbrel when I asked him if he knew who would close games in October.

“I don’t right now,” he said. “My expectation, my hope, is it’s Craig. But … it should be a meritocracy. It should be about performance. And I do believe that if he’s closing games, we’re better for it.”

With the Dodgers leading by one run, Kimbrel has only one save in five opportunities. Enough said. Utilize this next month to give others a chance. Use Evan Phillips. Try Brusdar Graterol. Cross your fingers that Blake Treinen recovers from his shoulder problems in time to give you another option. Try anybody. Try everybody. Even use each arm coming off the injured list, from Victor González to Danny Duffy to Tommy Kahnle.

“I think we’re pretty certain that with where the calendar is at, we can get them all healthy,” said Roberts. “Now it’s … also feeling confident in the performance. That takes some time. But those guys are easy to bet on.”

So, go ahead, gamble. Don’t wait until Game 3 of the division series to acknowledge Kimbrel won’t work. If you’re going to make a move — and you should — begin making it now.

Next thing … bench the stars.

Trea Turner and Freddie Freeman have played in every game. They need a break, particularly Turner, who was wiped out last October even after missing 15 regular-season games, and batted just .216 with two RBIs in the postseason.

“Certain guys are just built physically, mentally to play every day,” said Roberts of Turner and Freeman, but added, “I think we’ve done a very good job of when we can get them off their feet in a particular game, we do that to help them physically and, probably more importantly, mentally.”

Tony Gonsolin has already pitched nearly as many innings as in the previous three years of his career combined. He doesn’t need to start every fifth day. Clayton Kershaw has been on the injured list twice already this season. Ease him back, he can pitch in the playoffs without much prep. And while celebrating Dustin May’s spectacular season debut, remember it’s the only major league game he’s pitched in more than a year. Don’t wear him out before he can wear out someone else.

“I think it makes sense to manage the workload of the starters,” said Roberts. “So that lends itself to a potential six-man rotation for a bit.”

The division lead is overwhelming. The calendar is overpowering. The bigger picture is obvious. The manager seems to be on board. The mandate for this Dodgers team on the verge of grabbing history is clear.

Just don’t do it.