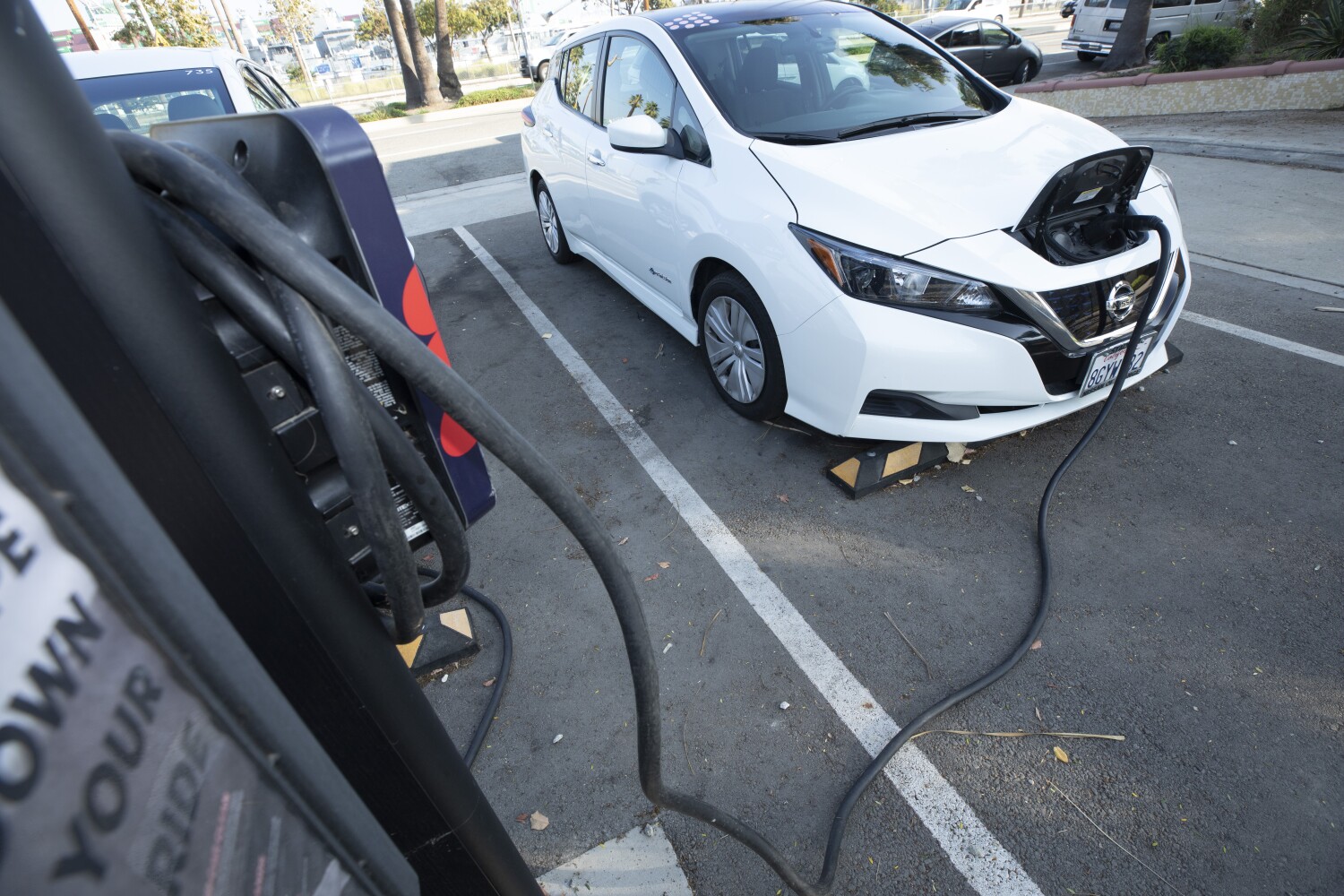 More than a third of new passenger cars and trucks sold in California in 2026 would have to be zero-emission vehicles under a new proposal from the California Air Resources Board.

To get there, electric cars would have to nearly triple last year’s market share of 13% in four years.

5:46 p.m. April 13, 2022An earlier version of this story incorrectly stated that the proposal would require 35% of cars sold in 2025 in California to be zero-emission vehicles. The mandate would apply to model year 2026 vehicles, which will be sold beginning in late 2025.

The 35% mandate would mark a major step toward the total ban on sales of new vehicles with internal combustion engines starting in 2035 under an order issued two years ago by Gov. Gavin Newsom. The EV mandate would hit 68% by 2030.

Will consumers go along? Interest in electric vehicles is on the rise, especially with gas prices that often top $6 a gallon.

But the air board, known as CARB, acknowledges that less expensive battery technology, more public charging stations and strong marketing campaigns will be necessary. Or, as the board put it in a report released Wednesday, “this consumer change will require continued improvements in electric vehicle technology, owner support and conveniences, as well as successful strategies to communicate the benefits to potential buyers.”

The goal is a significant reduction in greenhouse gases and harmful pollution.

A public hearing on the proposal will be held June 9, with a May 31 deadline for written comments.

Will Barrett, senior director at the American Lung Assn., notes that seven of the 10 smoggiest cities in the U.S. are in California. The zero-emission mandates will improve health and save lives through dramatic reductions in respiratory and cardiac illness, he said — and will even improve worker productivity, with 2 million fewer work hours lost to illness over a 30-year period.

Barrett said the state could go even further than 35%. Raising the mandate to 45%, he said, “would capture the greatest number of public health benefits.”

A total-dollar taxpayer cost on the switch to EVs has not been put forth by CARB or by Newsom’s office. But new spending will be required. The board estimates about $2.6 billion of public funds on top of investments made by private industry will be necessary to build out networks of public charging stations sufficient to handle the mandated numbers of EVs.

Yet to be determined is the effect on the state’s fragile electricity grid, which must be ready to handle millions of new EV passenger vehicles in addition to buses and commercial trucks, which face their own California mandates.

“The electric grid will have to expand and adapt rapidly to meet a new and more extensive demand,” CARB said. No word yet on how that will affect already-rising electricity bills for residential and commercial customers.

But CARB noted that the California Public Utilities Commission has “opened a new proceeding to modernize and prepare the grid” in anticipation of demand for electric vehicles.